Days Of Our Lives (DOOL) Spoilers: Chloe Interferes And Advises Sarah Not To Marry Xander 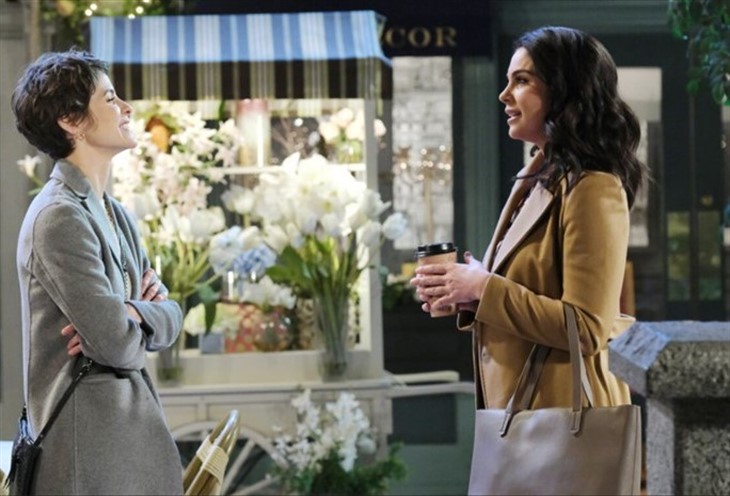 Days of Our Lives (DOOL) spoilers tease that Chloe Lane (Nadia Bjorlin) will interfere and advise Sarah Horton (Linsey Godfrey) not to marry Xander Kiriakis (Paul Telfer) in an upcoming episode of Days of Our Lives!

Days Of Our Lives Spoilers – Why Would Chloe Lane Interfere In This Manner?

The big question is, why would Chloe even interfere in this manner? Why is she even making it her business to interfere between Sarah and Xander to try to break them up? The only possible connection that Chloe would have would be Philip Kiriakis (Jay Kenneth Johnson), still wanting to make Xander’s life miserable even after he quit Titan Industries! Longtime viewers of Days of Our Lives will remember that Chloe and Philip had a sort of a romance going in their teenage years, only Chloe was in love with Philip and Philip wasn’t in love with Chloe – at least not at first.

He’d lost a bet with Shawn Brady (Brandon Beemer) that he wouldn’t date her because she was an ugly duckling. But once Chloe showed her true appearance, shedding her dork-like persona, Philip was smitten! Eventually, however, he lost her to Brady Black (Eric Martsolf). However, even if Philip is not behind this scheme to break up Sarah and Xander, it could just be Chloe’s opinions of Xander and his past that make her feel that he would only break Sarah’s heart. Indeed, later on in the week, Xander will be found in a compromising position – but not with Chloe. She’s trying to steal Brady Black (Eric Martsolf) from Kristen DiMera, (Stacy Haiduk) or at least that’s what Kristen thinks! Perhaps Chloe witnesses a shirtless Xander in a dark bedroom, as an unidentified seamstress mends his kilt – he’s standing, she’s kneeling, and mending right in the area of the family jewels, and that could easily be misconstrued!

Chloe runs into Sarah at Horton Town Square, and Chloe gives Sarah a warning not to marry Xander; she’ll only be hurt! Sarah looks polite but unworried as Chloe gives her spiel. Chloe had been talking to Philip at the Kiriakis mansion, and maybe she did open the wrong door at the wrong time and see Xander’s kilt mending session from entirely the wrong perspective. He was lifting up his kilt as the seamstress’ head could be seen right there in that area, and Xander with no shirt – Chloe knows EXACTLY what was going on! She thinks she does, anyway! Chloe sounds like she needs a cleansing of the imagination.

Not even Philip could have imagined something this scandalous to tell Sarah about if it had been his idea! Maybe it is Chloe trying to warn Sarah woman to woman what her man is doing when she’s not home and at the hospital saving lives! After all, the room was dark and the woman was kneeling and Xander was shirtless and lifting up the front of his kilt! If Sarah is rattled, it will be by the part about THE ROOM BEING DARK. There can be no other explanation for what Chloe saw with the room being dark! Sarah knew that Xander wanted to wear his kilt to their wedding and he was having it mended, but no seamstress MENDS ANYTHING IN THE DARK!!! Chloe agrees with her! Xander is going to get an earful when Sarah gets ahold of him!