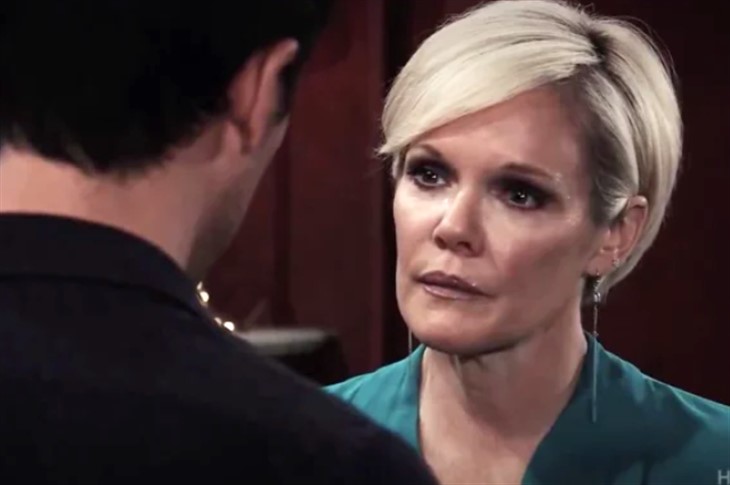 General Hospital (GH) spoilers and updates reveal Ava Jerome Cassadine (Maura West) and Nikolas Cassadine (Marcus Coloma) are an unconventional couple. Ava is an art gallery owner. The Jerome family had power in the mafia underworld. Nikolas is the heir to the vast Cassadine fortune. Nikolas was thought to be dead for three years because he was shot by Valentin Cassadine (James Patrick Stuart). Ava watched as Nikolas and Valentin struggled for the gun. Then the gun went off and it looked like Nikolas had been killed.

However, Nikolas survived. He returned to get back his fortune from Valentin. The first person that Nikolas saw when he got back was Ava. The two played a game of cat and mouse before they tied the knot. They both wanted to have the Cassadine fortune. Now a marriage based on money has turned into a loving relationship. However, there are those who may not want the couple to stay happy. Ava and Nikolas went on a date on Valentine’s day. Ava received a rather disturbing gift of a strange message and a glass-encased cockroach.

Ava and Ryan (Jon Lindstrom) have a complex past. Ryan is a serial killer who has tormented many in Port Charles over the years. Ava got involved with Ryan because she thought he was his twin brother the upstanding Kevin Collins (Jon Lindstrom) who he had taken the place of. During that time Ryan killed Ava’s daughter Kiki Jerome (Hayley Erin) because he thought it would somehow make Ava happy. Ava and Kiki were not getting along at that time. However, it devastated Ava to lose Kiki. Ava was further devastated to find out that she had been with the man that had killed her daughter. Ryan is obsessed with Ava. He is currently in prison with a condition that keeps him catatonic. Ava just confronted Ryan but did not get a response from him. Is Ryan the one who sent the creepy gift and card? Is he faking his condition so that he can get away to come after Ava and Nikolas?

Spencer (Nikolas Bechtel) is Nikolas’ son. Spencer grieved for his father and was determined to take down Valentin for killing him. Ava was going to testify that she saw Valentin kill Nikolas. However, she changed her mind when Valentin helped Ava to get surgery for facial scars. Spencer was not happy with Ava. Then Nikolas came back after three years. The reunion of father and son should have been happy but it was not. Spencer was upset that Nikolas did not let him know that he was alive and that he married Ava. Could Spencer be the one to try to break up his father’s marriage to Ava?

Nikolas and Cassandra (Jessica Tuck) worked together to help Nikolas get back his fortune from Valentin. However, he betrayed her. Cassandra is considered to be dead after a boat explosion. But she might still be alive. Could she be looking to get some payback from being betrayed by Nikolas?

Helena (Constance Towers) is Nikolas’ grandmother. She is the matriarch of the Cassadine family. She is a very dangerous and determined woman. She has been dead for a long time but has been known to rise from the dead. Could Helena be the one who is coming after Ava because she does not want Nikolas with her?

General Hospital Spoilers – Nikolas and Ava Have a Problem

General Hospital’s Ava and Nikolas are in some sort of danger from an unknown threat. They are not completely worried at this point. However, they might need to be if the threat becomes worse. Will Ava and Nikolas find out who sent the gruesome Valentine? Will the person hurt Ava or Nikolas? How much danger is Nikolas and Ava in? Tune into General Hospital to find out if Nikolas and Ava can find out who is after them.