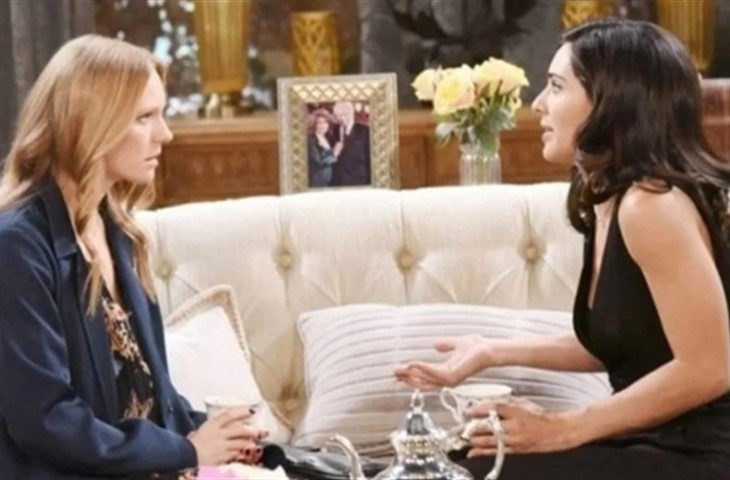 DOOL spoilers reveal that Abigail is determined to get revenge for Laura Horton’s (Jaime Lyn Bauer) death. She doesn’t believe Gwen’s story and if the police won’t charge her with murder, then Abigail will take matters into her own hands. But she can’t do it on her own, so she turns to her sworn enemy and makes a deal. Gabi will agree to team up with Abigail since they both have a common enemy.

During the week of March 1, Abigail and Gabi knock out Gwen and put her in a covered rolling cart. It resembles the laundry baskets housekeepers take from room to room at hotels. As they are pushing the cart with an unconscious Gwen hidden inside, Bonnie stops them. She is curious and wants to know what’s inside. Gwen and Abigail stammer for an answer, but then Bonnie joke that they must have a body in there. Everyone laughs and the kidnappers continue hauling Gwen away.

Days Of Our Lives (DOOL) Spoilers: Chloe Interferes And Advises Sarah Not To Marry Xander

Days of Our Lives spoilers reveal that the only person who cares about Gwen is her father. If Jack reports Gwen missing and words gets around Salem, Bonnie may tell Rafe about what she saw. Rafe is required to follow up on all leads no matter how he feels about someone. It’s the same reason why he has to investigate Charlie Dale’s (Mike Manning) murder and find out who killed him. The same rule applies where Gwen is concerned.

At some point, Jack figures out that Abigail and Gabi have kidnapped Gwen. He turns to Chad DiMera (Billy Flynn) and tells him about arguing with Abigail about Gwen. Then, Chad confides in Anna DiMera (Leann Hunley). Interestingly enough, Anna ends up making a surprising discovery, which has to be Gwen being held, hostage. She’s most likely stashed in the DiMera tunnels because that’s where everyone ends up when they are taken, prisoner. However, nobody likes Gwen and thinks she deserved to be punished. Everyone except Jack, who feels sorry for his new daughter.

Days Of Our Lives (DOOL) Spoilers: Sarah Plays Cupid, But Is Brady Ready To Move On From Kristen? https://t.co/L5ewzO8A4v pic.twitter.com/uDXc9GS9XQ

So, when Anna sees Gwen held hostage, will she release her or inform the police? Or will she just walk away and let the two women get their revenge? Will Abigail and Gabi face legal consequences for their actions? We will have to keep watching the NBC soap to find out.