The Bold And The Beautiful (B&B) Spoilers: Finn Isn’t Very Happy With His Current Arrangement With Steffy And Liam 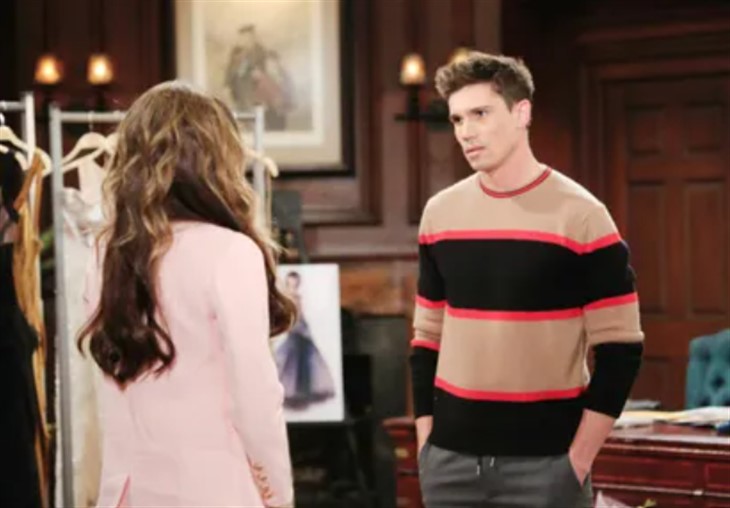 The Bold and the Beautiful (B&B) spoilers say that in Los Angeles for Dr. John Finnegan (Tanner Novlan), three is certainly a crowd between him, Steffy Forrester (Jacqueline MacInnes Wood), and Liam Spencer (Scott Clifton). As a matter of fact, he’s making it known that he’s not too pleased about this current arrangement between him and the woman that he loves, Steffy, and the father of her child, Liam. But then again, who can blame him? Read on for all of the latest spoilers.

According to the latest edition of Soap Opera Digest, Liam tells Steffy that he absolutely plans on being a part of her pregnancy, regardless of what anyone has to say about it. Of course, we’ve heard all of this from Liam before. But at the same time, Steffy has made it clear that her heart belongs to just one man, and that’s the handsome doctor, even though she’s carrying another man’s baby.

The Bold And The Beautiful (B&B) Spoilers: Could Finn Become Violent – Liam A Target Of Doc’s Rage

Speaking to the publication in a new interview, actor Tanner Novlan, who plays Finn on the hit CBS soap, quips, “Finn does not seem to know that he’s part of a soap opera. He knows that Steffy has a long, complex history with Liam and Hope. However, Steffy has made it clear that Finn is the one she wants to be with, not Liam. Since Finn feels the same about her, he takes Steffy at her word, which is why he’s so supportive of her and her pregnancy.”

The Bold and the Beautiful spoilers say that Liam will continue to be a presence in their lives, much to the dismay of Finn. That’s when he realizes that he needs to lay down the law. Sure, Liam and Steffy are about to welcome their second child together, but there’s no real love or bond between them. Instead, Steffy’s heart belongs to Finn and that’s why he is about to set some boundaries. But whether or not that will happen remains to be seen. Of course, B&B fans will have to tune in to find out!