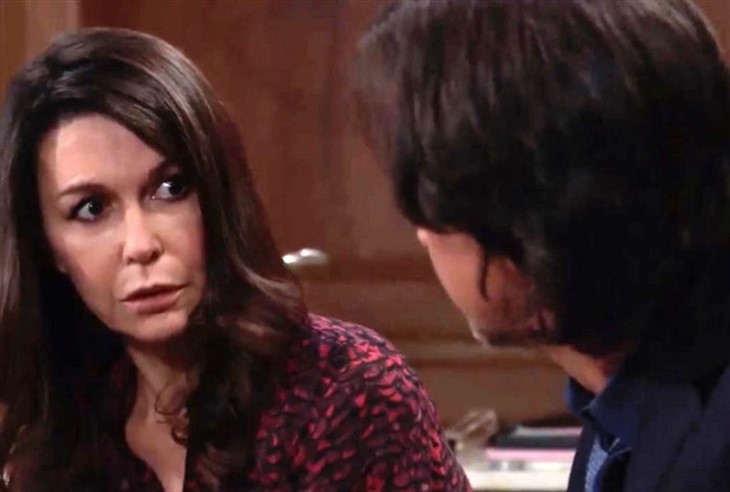 General Hospital Spoilers (GH) suggest that in Port Charles, NY Anna Devane’s (Finola Hughes) and Hamilton Finn’s (Michael Easton) wedding may not go as planned. Unfortunately, the truth about Peter August (Wes Ramsey) may come out as well. How will Finn react when he learns that Anna has lied to him again?

General Hospital’s Anna has known for some time that she is not Peter’s mother. Anna has chosen to keep this information from Finn. Peter has disappeared from the wedding and Anna continues to lie as Finn feels sorry for her over Peter’s absence. Anna still continues to lie knowing that she is trying to protect Maxie Jones (Kirsten Storms) from Peter as well. Anna knows she should tell Finn the truth, however, stalling is not helping her at all. Anna even sabotaged that wedding but didn’t let Finn in on the plan. Can he ever forgive her?

General Hospital’s Anna and Valentin chose to kidnap Peter and make it look like he left Maxie. Anna knew this would stop her wedding to Finn as well. However, Anna chose again to keep Finn in the dark about all the crimes Peter has committed. After all, Anna has no proof of everything Peter has done. Instead, Anna has chosen to gather evidence while keeping quiet again. Finn will be blindsided when the truth comes out. Finn already suspects that something is wrong but Anna promised no more lies. How can Anna possibly make it look like she was doing what was best?

General Hospital Spoilers: Will Carly’s Confrontation With Nina Cause Her To Go After Wiley?https://t.co/dQBjIv7etL

General Hospital Spoilers – Violet Barnes Could Have Been In Danger

General Hospital’s Violet Barnes (Jophielle Love) could have gotten hurt by Peter at any time. Peter took Jason Morgan (Steve Burton) from his infant son and wife for five years. If Peter could use Danny Morgan (Porter Fascullo) in that manner, he could hurt Violet as well. Finn would certainly have problems with this realization. Finn left Anna over this once before. Anna’s decision to stay quiet while bringing Peter to justice could be the final nail in the coffin when it comes to her relationship with Finn. Anna knows that protecting Finn’s daughter is his number one priority. Finding out that Anna has been lying all this time could cause very big issues for Anna and Finn. Will Finn and Anna be able to come back from this?

General Hospital’s Finn cannot stand for Anna’s lies. Has Anna finally ruined all the trust between Finn and herself? Will Finn break things off for good?