Days Of Our Lives (DOOL) Spoilers: Abigail And Gabi Kidnap Gwen, Gets Caught By Bonnie 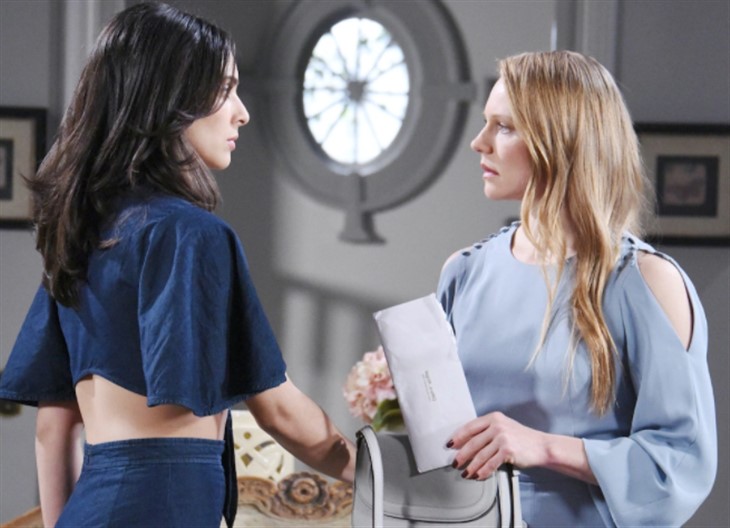 Days of Our Lives (DOOL) spoilers tease that in Salem Abigail DiMera (Marci Miller) and Gabi Hernandez (Camila Banus) kidnap Gwen Rizchech (Emily O’Brien) but must convince Bonnie Lockhart (Judi Evans) that they’re not transporting a dead body in an upcoming episode of Days of Our Lives!

Days of Our Lives viewers will remember that it took a while for Abigail to actually get Gabi moving on the caper. She first asked her about it a couple of weeks ago and then pressed her again. Finally, they decide on a plan, after deciding what to do with Gwen. They decide to kidnap her and stash her in the tunnels under the DiMera mansion. They had better hope she doesn’t find the way out unless the plan is to stash her in the wine cellar, which has one locking door. Gabi is familiar with that one. She was locked in there with Stefan DiMera (Brandon Barash) by Kristen DiMera (Stacy Haiduk) a couple of years ago!

It was where Stefan and Gabi made love the first time, but it is impossible to get out of if locked in! Now that they have settled on where to stash her, they have to work on a plan to get her there! Abigail and Gabi both have good reasons to want to rid themselves and the world of Gwen! Gwen drugged Abigail with some kind of hallucinogen procured through Dr. Wilhelm Rolf, (William Utay) and Gabi got blamed for it! Gwen murdered Abigail’s grandma Laura Horton (Jaime Lyn Bauer) and she is certain of it regardless of what her father says. Gwen seduced Abigail’s husband. Gwen hasn’t done nearly so many bad things to Gabby, but she dislikes her just the same. The two women plot how to kidnap Gwen and get her to the DiMera mansion.

Days Of Our Lives Spoilers – It’s Going Down

Gabi and Abigail sneak into the housekeeper’s area in the Salem Inn and grab a laundry cart. They pretend to be maids and knock on Gwen’s door. When she answers, they clobber her and tie her up with a sheet, and stuff her in the cart underneath the bedding, after making sure she really is out! They make sure she’s very securely wrapped!

Abigail remarks it’s too bad they don’t have some of that drug from Rolf to use on her! From there, the plan is to sneak her into the mansion and lock her in the wine cellar. After that, they still have to figure things out. But they encounter an unexpected roadblock – one named Bonnie Lockhart! She stops them as they are on the way from the Salem Inn in the middle of the night to their vehicle and points a finger and accuses them of transporting a dead body in the laundry cart! They have very little time to convince the nosy Bonnie, who wants to see what’s under the bedding that she’s wrong!

She doesn’t understand why they have a laundry cart full of bedding from the Salem Inn and why it is taking both of them to push it! It shouldn’t be that heavy! Abigail tells her not to touch the bedding and that she is doing an investigative report on how easy it is to steal towels and other items from hotels, and how poor the security is.

She tells her Gabi is there because she knew how to get into the room without a key (Gabi makes a face on that one, but it works!) She also explains it is taking both of them to transport the cart because it doesn’t just have bedding-it has the television and basically everything else under the bedding, they stripped the whole room down to make a point for the story! Bonnie, a writer, is intrigued and can’t believe it would be that easy to rob an upper-class hotel! Finally, they get away from Bonnie and head off to the mansion to rid themselves of Gwen!