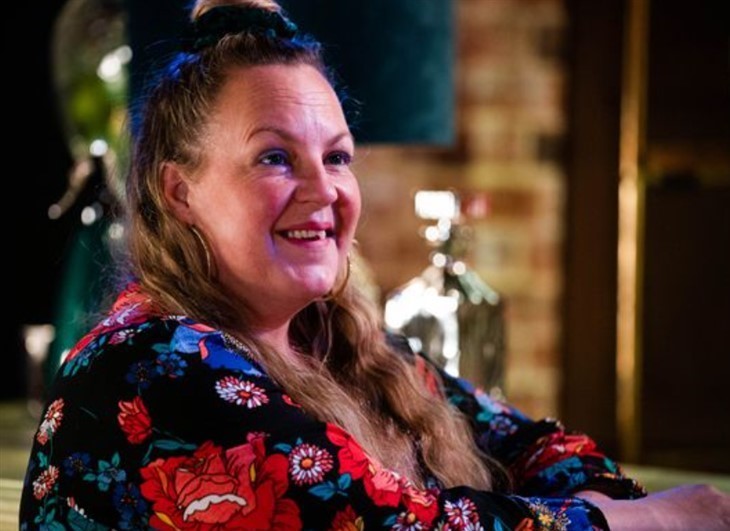 Eastenders spoilers reveal that in Walford Karen Taylor (Lorraine Stanley) flirts with Lucas Johnson (Don Gilet). She can’t believe her luck when he agrees to go on a date with her. However, he doesn’t tell Karen his real name. Instead, he uses his son’s name. She’s heard the stories of Lucas but has never seen his face, so she has no clue her dream date is with a serial killer.

Eastenders spoilers reveal that Karen sees a handsome man and starts flirting with him. She figures it can’t do any harm. Imagine her surprise when the mystery man asks her for her name. She tells him and asks what his name is. It’s obvious to Lucas that Karen has no clue who he is or his history. He uses this to his advantage. An insider explained to Inside Soap magazine,

“This handsome, very charming man walks into the launderette and she thinks, ‘I’ll chance me arm!’ and her flirting pays off. However, as viewers know, Lucas isn’t the sort of man that a woman wants walking her home at the end of the night…”

Eastenders Spoilers: Phil And Kat Get Serious Despite Criticism, Do They Sizzle Or Fizzle?

Eastenders spoilers reveal that while Karen doesn’t know Lucas’ face, she might have heard the name. So, Lucas tells her that his name is Jordan… the name of his dead son. Of course, she doesn’t know any different. As a source told Inside Soap magazine, Karen has heard the stories of Lucas, but she didn’t move to the area years after his killing spree. She has also never seen a photo of the serial killer, so she doesn’t realize the danger she is in. Instead, she thinks it’s her lucky day.

Of course, Karen can’t wait to tell her family and friends about her dream date with a mysterious man she just met. Mitch Baker (Roger Griffiths) and Bernie Taylor (Clair Norris) want to see what this dream guy looks like. When Lucas isn’t paying attention, Karen takes a picture of him and sends it. Of course, when they see the photo, they will realize “Jordan” is really serial killer Lucas.

Saved From A Serial Killer?

Will Mitch and Bernie be able to save Karen before it’s too late? We’ve seen Lucas struggle with his urge to kill. The date with Karen could be his way of trying to live a normal life while he resists the compulsion to murder. But it’s more likely that Karen could end up becoming another one of his victims. Let’s hope that she can be saved before it’s too late. Chantelle Atkins (Jessica Plummer) was killed by her own husband, Gray Atkins (Toby-Alexander Smith) not too long ago. The last thing the Atkins’ children need is to lose Karen too.