General Hospital Spoilers: Alexis Demands The Truth From Valentin About Their Cassadine Past 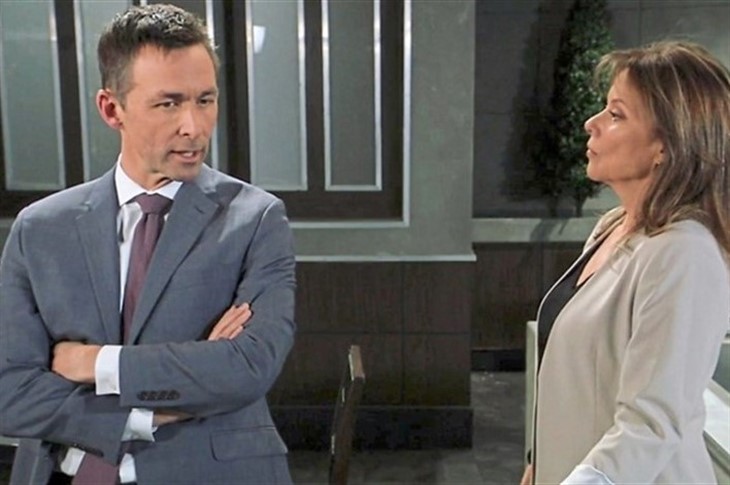 General Hospital (GH) spoilers tease that in Port Charles, NY Alexis Davis (Nancy Lee Grahn) will want the truth about something from Valentin Cassadine (James Patrick Stuart) in an upcoming episode of General Hospital. It will have to do with something in their Cassadine past.

It is obvious that Alexis and Valentin still have a brother and sister relationship even after Valentin found out they didn’t share a father after Nikolas Cassadine (Marcus Coloma) retrieved the codicil to Mikkos Cassadine’s (John Colicos) codicil and forced a DNA test between him and Valentin, which showed no relation on their Cassadine side, only their Romanov side. Valentin is still Nikolas’ uncle, just his maternal uncle instead of his paternal uncle. Valentin wasn’t always on Cassadine Island, and was probably either in WSB spy school or working as a mercenary when Alexis came over to Port Charles with her uncle Stefan Cassadine (Stephen Nichols).

But Valentin still knows the family history and retrieved a lot of Cassadine and Romanov memorabilia after Helena Cassadine (Constance Towers) died. Alexis, as a part of her trying to achieve freedom from alcoholism is also trying to achieve emotional healing, and her therapy may include delving into her past and possibly even her childhood. General Hospital viewers will recall that among other things Valentin found was a photograph of her mother, now one of her most cherished possessions along with a watch. He also found the dagger her mother was killed with, but now she associates that with her ex-husband Julian Jerome (William DeVry) holding it to her neck, so that is not such a good piece of memorabilia for her!

Valentin is three years older than Alexis and history says was disowned by Mikkos and sent to boarding school at the age of five, so anything he does know he found out during his time on Cassadine Island after Helena died. He did return there as a mercenary and had dealings with Helena, so he did know her as an adult although he believed her to be his stepmother, not his mother.

He found out later it was Helena who sent him away, not Mikkos, and tells Alexis he has found out a lot more about his past since he started doing more investigation. He found out he had a half-sister, Irina Cassadine (Alyshia Oche) who Helena had put in a mental institution and whom Helena later killed! He tells Alexis there is probably a lot of bad things that were attributed to Mikkos that Helena was actually responsible for in her childhood too.

Alexis wants to know more about Valentin’s childhood – and wonders why Mikkos never looked for him after Helena sent him away. There was an earlier will, the first one that Valentin found that had named him as third in line to inherit should Stefan and Stavros Cassadine (Robert Kelker-Kelly) die. Alexis saw it when Valentin first came to Port Charles, as an attorney had looked it over for him.

Valentin and Alexis, knowing how evil Helena was and how she killed Valentin’s sister Irina and sent him away as a small child wondered together what happened. What kind of lies did Helena tell Mikkos about Valentin? Alexis and Valentin came to a conclusion about the truths of both their childhoods in their conversation – and that was that Mikkos loved and protected Alexis and her baby sister, Kristina Cassadine (Jaime Ray Newman), who was given up for adoption, and Mikkos probably never knew where Valentin was as a child because of Helena!