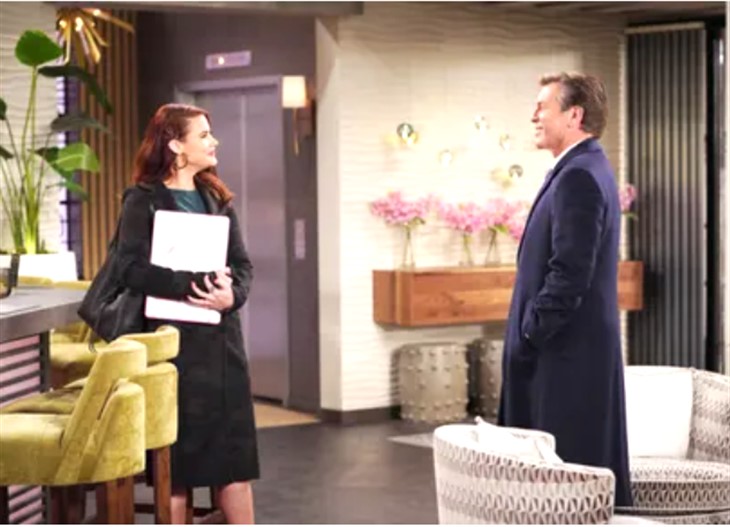 Nick’s tell about Phyllis Summers’ (Michelle Stafford) concerns was heartfelt, as are Jack’s former wife’s worries. But it’s reasonable to think that Jack is keeping Sally close in order to observe her, rather than become immediately involved on a romantic level.

The Young And The Restless Spoilers – Initial Intentions Melt Over Time

Jack could be in control of himself and isn’t vulnerable to Sally’s charms, as Phyllis thinks he is. Bergman’s character is worldly, with his experience in matters of the heart legendary in Genoa City, Wisconsin.

It did seem a bit of a stretch that Jack wouldn’t know what Sally might be aiming for. Then again, he could recognize her intentions while also enjoying her companionship and simply see what results as time passes.

For the moment, Sally is pushing to cross into a romance with Jack. He hasn’t agreed yet but is furthering their friendship.

Kyle Abbott (Michael Mealor) has been threatened by Sally on a number of occasions and in a variety of ways. She is serious in believing a stalemate has been achieved, as her knowledge of Harrison Locke (no actor known to be cast for this role) is a weapon.

Mealor’s character is trying to talk away Sally’s push to confirm his fatherhood status. That hold can’t last indefinitely. Plus, Sally has to realize that the intel she possesses and Summer Newman’s (Hunter King) naivete can be utilized for gain in some fashion.

Jack needs to know that he is a grandfather. Sally projects as the person, possibly unintended, who serves as the reveal source.

The Young And The Restless (Y&R) Spoilers: Victor Brings Adam Back to the Business – Newmans Outraged at The Moustache https://t.co/wUxDypPT0O pic.twitter.com/rg0NkoYXNb

The Young And The Restless Spoilers – Phyllis Summers Defends Her Daughter

Phyllis isn’t a big fan of Kyle’s. So she is snooping on Sally purely to help protect her daughter.

Summer was Sally’s initial target, which was based on jealousy. That effort was applied to Kyle’s life with Theo Vanderway’s (Tyler Johnson) nasty help.

Just as Jack is a formidable force, so too is the Phoenix. Phyllis is one of Y&R’s ultimate resilient artists. She recognized a younger version of herself in Sally and stands as the likely greatest threat to permanently neutralize or force Hope’s character to either leave GC or cross back over to The Bold and the Beautiful.