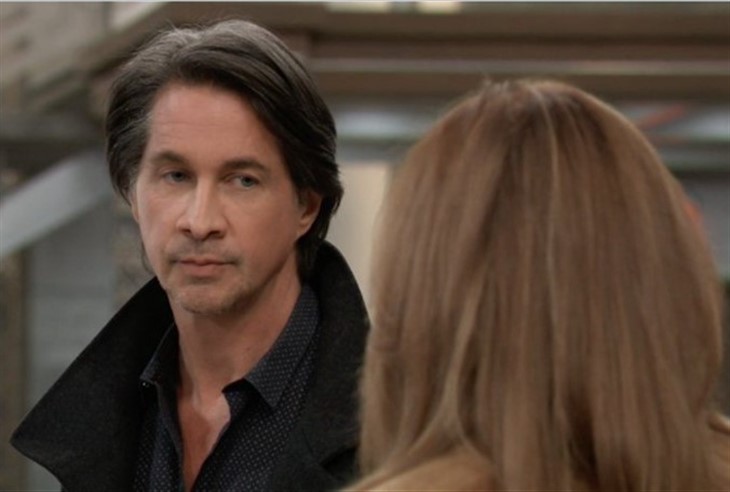 General Hospital (GH) spoilers tease that in Port Charles, NY Anna Devane (Finola Hughes) and Jackie Templeton (Kim Delaney) will find they have a lot in common in an upcoming episode of General Hospital. That includes two men who have been in their lives, Anna’s ex-husband Robert Scorpio (Tristan Rogers) and Anna’s ex-fiancé Dr. Hamilton Finn (Michael Easton). Now that Anna and Finn have hit the skids, will Jackie go after him?

While Finn was open and honest with Anna, she was not open and honest with him. He walked out of their would-be wedding when the truth about Alex Marick (Finola Hughes) being Peter August’s (Wes Ramsey) mother came out publicly. General Hospital viewers will remember that as Liesl Obrecht (Kathleen Gati) played the flash drive sent to Peter by Dimitri Marick (Michael Nader) that Alex told Peter to ask Anna if he didn’t believe her – and he did, and Anna admitted she had known since last August.

Finn was infuriated because she didn’t tell him, and when she tried to make amends later, he had enough of the lies, asking her what else she was lying about! He and Anna had been dating for a very long time and this wedding had been a very long time coming. She broke his heart with her not being able to trust him, but she had kept covering up for Peter, and in his eyes, she put protecting her son revealed as nephew ahead of him and their relationship! He even told her – after some time, admittedly – that he and Jackie had slept together the night before Jackie married his father and that Detective Harrison Chase (Josh Swickard) might be his son instead of his brother! Now, the big question is – now that Jackie is divorcing Gregory Chase (Gregory Harrison) and Finn and Anna are on the skids, will Jackie go after Finn?

GH Spoilers – Anna Devane And Jackie Templeton Have More In Common Than The Same Men, But Jackie Is Much More Aggressive

Jackie did date Robert a long time ago when he was between Anna and Holly Sutton (Emma Samms). But Anna and Jackie do have more in common than the same men! They are both mothers, they are both investigators – Anna a spy, Jackie a reporter. They knew the same people back in the day. But it seems that Jackie is much more aggressive than Anna is. Anna is methodical and calculating, and while she can be aggressive when going after a bad guy more often than not she doesn’t move on situations – or people – quickly.

Jackie sees something she wants – a story, a situation, and maybe a man – and goes after it with gusto! General Hospital viewers will remember when Jackie first came back to Port Charles, that there was no talk about divorcing Gregory until she had reconnected with Finn! They talked about that night they spent together and Finn pressed her about Chase’s paternity even then – and she was evasive. She has continued to be evasive, with Finn having to look for the facts himself by doing a paternity test to see if Chase is his son. Still, she was evasive and begged him not to pick it up; she worries about what it will do to “Harry” if his paternal history was changed, but what will it do if she takes advantage of Finn and Anna’s breakup and goes after Finn?