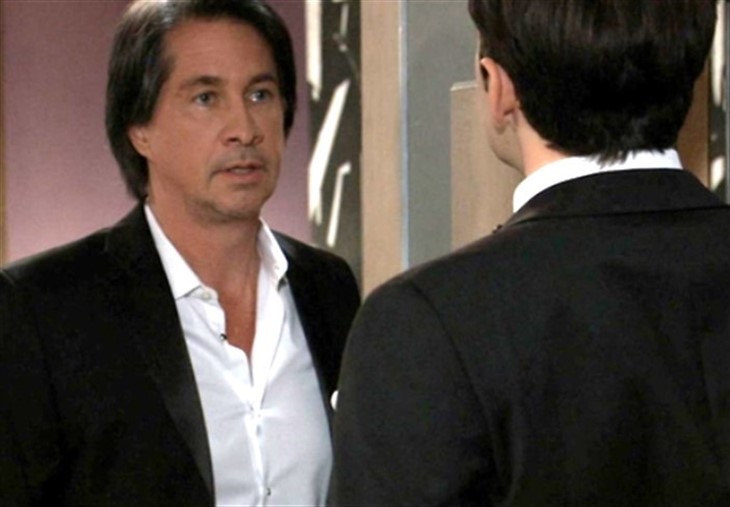 General Hospital (GH) spoilers tease that in Port Charles, NY Gregory Chase (Gregory Harrison) is in for a shocking revelation when he stumbles upon something he cannot unhear; as his son and his wife are talking at the entrance of her hotel room, a question Gregory has had for nearly thirty years is answered in an upcoming episode of General Hospital!

General Hospital viewers will remember that Jackie Templeton (Kim Delaney) and Dr. Hamilton Finn (Michael Easton) have kept a secret for nearly thirty years – a secret that might have resulted in Detective Harrison Chase (Josh Swickard)! Jackie and Finn had an affair while Finn was completing his medical school, and when she met his father. Jackie liked both Finn and his father, but when Finn wouldn’t commit, she started dating his father!

She came into the elder Chase’s life not long after his first wife, Finn’s mother had died and it likely had been a rebound. Gregory and Jackie started dating when Jackie was still kind of dating Finn, and as a result, the night before Jackie was to have married Gregory Chase, she and Finn spent the night together. There has been a question as to whether Chase is Finn’s or his father’s for nearly thirty years, and it is the reason why Finn didn’t have anything to do with his father, Jackie or much to do with Chase until comparatively recently! There was a conversation recently when Maxie Jones (Kirsten Storms) was late for her would-be wedding, where the elder Chase talked about Jackie getting stuck in the brides’ room and him thinking she wasn’t going to show up! In the General Hospital sneak peek for Monday, March 8, he figures it out!

General Hospital viewers will remember that after Finn walked out of his wedding to Anna Devane (Finola Hughes), he was devastated and went to have a talk with his stepmother, Jackie. Part of the reason he went to her was to find out where his daughter Violet Finn (Jophielle Love) was. It turned out after Jackie and Chase took her out of the wedding when things started going sour, Chase had taken her to his apartment, where Gregory went while Finn went to Jackie’s hotel room. Greg was intending to spend some more time with Chase and his granddaughter after he read Violet a story and got her to sleep when a weeping Willow Tait (Katelyn MacMullen) arrived to talk to Chase, so Gregory left. As he rounds the corner of a hallway, he spots Finn and Jackie at the door of her hotel room and hears their conversation – he starts to leave but he cannot! Jackie is telling Finn how she is always in awe of him for how steady he is, and his ability to soldier on no matter what was going on around him.

She continues, telling Finn she has never forgotten that and doesn’t want him to forget it either. Finn smiles and thanks to her for the compliment. He also thanks her for listening. But what catches Greg’s attention is when Jackie starts telling Finn how attracted she was to him when he was a student! Gregory looks disgusted but cannot turn away – and he moves in closer to hear the rest of the conversation! Finn says how nice it is to talk and how it reminded him of the connection they used to have when – Jackie interrupts, and finishes his sentence with when he didn’t show up to her wedding? Finn answers with knowing him, was she really surprised? He continues, telling Jackie there was no way he was setting foot in that church after what happened the night before! At that point, Greg walks up to them and asks what that was, exactly? Please, continue! He directs his next question to Jackie and asks her what happened the night before their wedding, although his body language indicates he already knows!