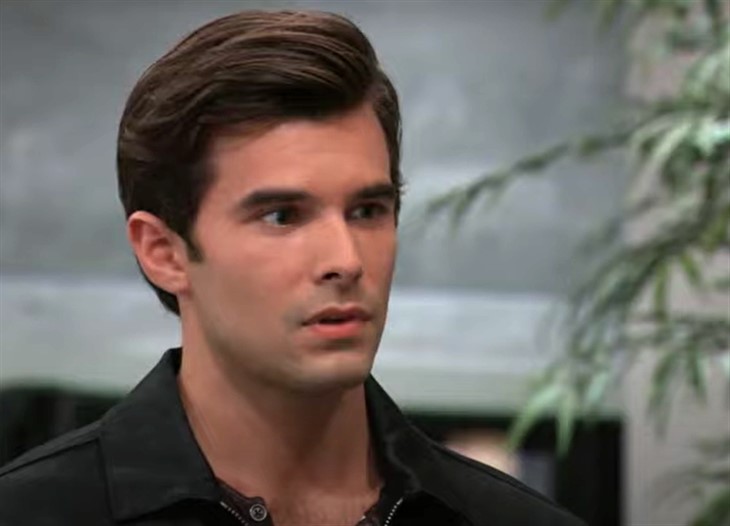 General Hospital (GH) spoilers tease that in Port Charles, NY Detective Harrison Chase (Josh Swickard) will see something that he isn’t meant to, and it will throw him for a loop in an upcoming episode of General Hospital!

General Hospital viewers will remember that Jackie talked to Dr. Hamilton Finn (Michael Easton) when they ran into each other at the hospital shortly before his wedding to Anna Devane (Finola Hughes) was to have taken place. It was then that he admitted to her that he had turned in DNA for a paternity test between himself and Chase, who he suspected maybe his son instead of his much younger brother! Jackie kept insisting that even though she and Finn had slept together the night before she married his father, Professor Gregory Chase (Gregory Harrison) and Finn thought the timeline was right for “Harry” to be his son, she denied it.

She has denied it for nearly thirty years, and she wasn’t going to change her story now! However, when Finn told Jackie that the test results were in she begged him not to pick them up before the wedding – and he told her he wouldn’t. However, now that the wedding didn’t happen, he more than likely will pick up the test because he will want to see what it says. It looks like it might confirm that Finn, indeed is Chase’s father and he will want the truth to come out. He will likely go to Jackie first but it sounds like Gregory will find out too – because he will confront Jackie about something and this might be it!

GH Spoilers – Hamilton Finn, Jackie Templeton, And Gregory Chase Will Agree To Keep The Results Secret From Harrison Chase, But He Might Find Out Anyway!

What that Chase could see that he wasn’t meant to throw him for a bigger loop than the paternity test results?! General Hospital viewers will remember that Chase has been very worried about Finn after his relationship with and wedding to Anna Devane (Finola Hughes) blew up in his face! Finn just wanted to be left alone but Chase didn’t want to leave him alone. He will continue to be worried about his “brother” as long as Finn is dealing with the aftermath of his former fiancée having put her trust in her former spy school friend Valentin Cassadine (James Patrick Stuart) more than him!

General Hospital Spoilers: Paternity Shocker! What Will Chase Do If Finn Is His Father? #GH #GeneralHospitalhttps://t.co/2DgBFi1RDZ

Finn walked out of his wedding when Anna admitted to Peter August (Wes Ramsey) that she had known that her twin sister Alexandra Devane Marick (Finola Hughes) was his birth mother instead of her, and had not told Finn, but she told Valentin! It will not be surprising if Finn keeps the results in his office at General Hospital and Chase goes looking for him and he’s not there. Chase could even be on the job when he looks for Finn, and he may have inadvertently left the file out on his desk, possibly having been called to check up on a patient. Chase’s curiosity but also his detective skills would come into play as he sees the file possibly labeled with both his and Finn’s names. He wouldn’t be able to resist looking in the file, and it would be obvious to him immediately what the results mean; his “brother” is really his father, and his “father” is really his grandfather and his “niece” is his sister! Would it ruin his life like Jackie has worried it would? Probably not, but he would have a lot of hard questions for his mother to answer!