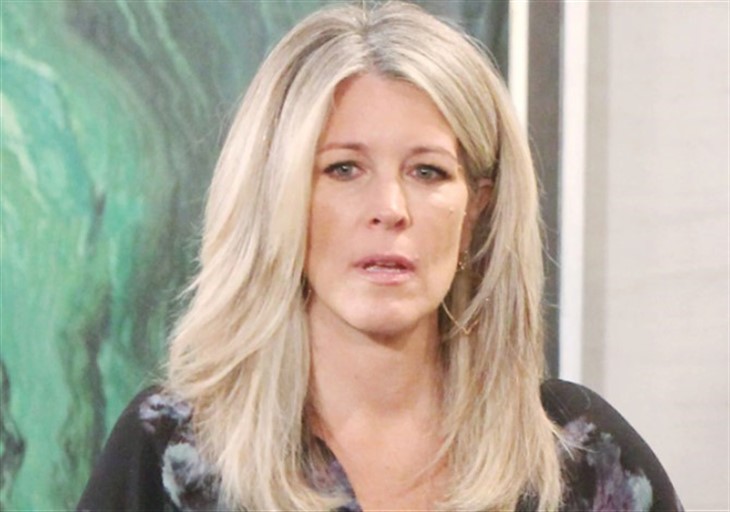 General Hospital (GH) Spoilers suggest that in Port Charles, NY Liz Baldwin (Rebecca Herbst) and Carly Corinthos (Laura Wright) will soon clash. Liz is adamant in her defense of Franco Baldwin (Roger Howarth) and Carly will seemingly be defending Jason Morgan (Steve Burton). What happens to cause this confrontation?

General Hospital’s Franco’s brain tumor is back and he’s is scared of what he might do. Jason has Franco for what he did years ago before the first tumor was removed. Franco went to Jason because he knew he was the one person who could and would shoot him should the need arrive. Now that Franco has gone off on Cameron Webber (William Lipton), Jason may have a reason to be concerned. However, Franco left a message with Sam McCall (Kelly Monaco) to tell Jason he was still himself. Once Jason talks to Sam, he will have no reason to go after Franco. However, that won’t stop Liz from accusing him of it. Will Carly convince Liz that she’s wrong?

GH Spoilers  -Liz Baldwin Is Determined To Save Franco Baldwin

General Hospital’s Liz is determined to save Franco no matter what. Franco has already attacked one of her children and moved out because of it. Now Franco has listened to the recording he made as Drew Cain (ex-Billy Miller) and realized that Peter August (Wes Ramsey) was behind Drew’s kidnapping. Franco is determined to make him pay. Franco has attacked Peter with a tire iron and knocked him out but no one knows this. No one knows where Franco has disappeared to at all. However, Peter has a good and this could quickly turn bad. What will happen with Franco and who will Liz blame?

General Hospital’s Franco could end up dead or gravely injured. However, if Franco gets hurt at this point, it will not be at the hands of Jason. That will not keep Jason from being blamed by Liz and Carly will defend Jason’s choices. Of course, Jason has every right to hate Franco for what he put him and Sam through. However, Jason just wished Franco well and told him to take care of his family. Franco is not on Jason’s radar unless he comes directly after him or someone he loves. However, Peter is determined to shut Franco up before he can tell anyone what he knows. Peter knows that Franco is the one person who can take him down and he’s not about to allow it. Why not take out Franco and blame Jason?

General Hospital’s Liz is determined to see Jason pay if anything happens to Franco. At this point, Liz doesn’t care if Jason did it or not because he promised to take Franco out. Will Carly put Liz in her place? Will Jason lose his son over something he didn’t do?