The Bold And The Beautiful (B&B) Spoilers: Zoe Begs For Another Chance – Carter Says NO WAY 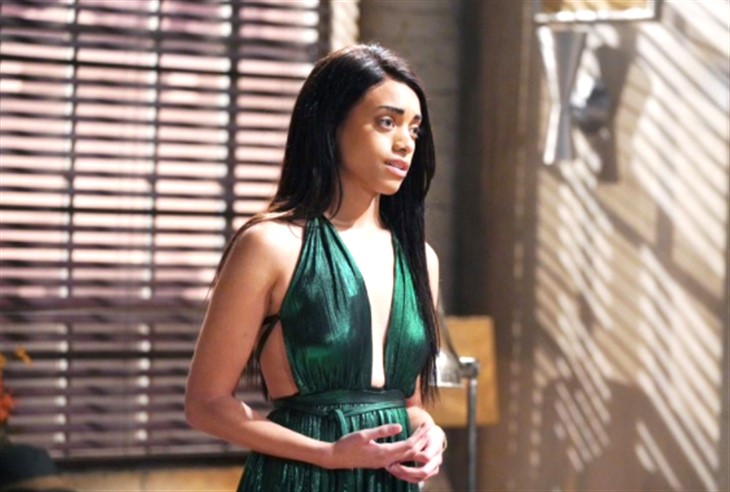 The Bold and the Beautiful (B&B) spoilers tease that in Los Angeles Zoe Buckingham’s (Kiara Barnes) hopes of reviving her relationship with Carter Walton (Lawrence Saint-Victor) appear to be in vain. Buzz indicates that Zarter is over.

Unless there’s a miraculous change in Carter’s heart, or some unanticipated event alters this outcome, Zoe will be forced to move on. As for her former fiance, he’s used to being on his own and will remain single.

Carter told Zoe that he had concluded that the married life wasn’t for him until she came along. But his heartbreak appears to support that instinct.

The Bold And The Beautiful (B&B) Spoilers: Katie Set Up For Heartbreak – Bill Can’t Be Trusted

The Bold And The Beautiful Spoilers – Using Excuses As An Explanation

Zoe’s desperation showed in a number of ways. After descending the stairs of the apartment that she recently shared with Carter, Zoe began speaking in a normal tone.

The green dress she embodied was resplendent. Carter was initially enchanted with the mere sight of Zoe, which proved to be a mini replay of their brief relationship.

However, Zoe’s volunteered explanation about Reese Buckingham, (Wayne Brady), Xander Avant (Adain Bradley), and Thomas Forrester (Matthew Atkinson) didn’t go over at all. In truth, she was making excuses.

Zoe was, in effect, transferring blame from herself to her father, past boyfriend, and a faux fiance. That set Carter off, as he rightfully told Zoe that he wasn’t Reese, Xander, or Thomas.

Carter feared that Zoe had not only treated him terribly but wasn’t sincere about being wrong. His suspicions seemed to bear out, as her impassioned stories set herself up as the victim of her father’s kidnapping scheme, Xander’s abandonment, and Thomas’ wedding ruse.

In a fated moment, Carter’s presence as the officiant at the failed Thoe wedding sparked his feelings for Zoe. He began pursuing her shortly thereafter.

The Bold And The Beautiful Spoilers – Carter Walton Shares Some Blame

While Carter didn’t break Zoe’s trust, he makes a pressured push for her. The intensity of his efforts was arguably smothering.

The Bold And The Beautiful Spoilers: Zoe Buckingham Tears Into Her Sister, Blaming Her For Her Relationship Disasters #BB #boldandBeautifulhttps://t.co/h6vu5PQ9Cg

It wasn’t wrong for Carter to gush over Zoe, as she projects an impressive appearance. But he learned that surface looks covered flaws within her character.

Carter went too far too fast. Zoe’s history caused her to latch onto the first guy who offered a chance at stability. She wasn’t ready to settle down, which indicates a lack of developed maturity. So, this couple doesn’t appear destined to be together, or at least won’t be right now.