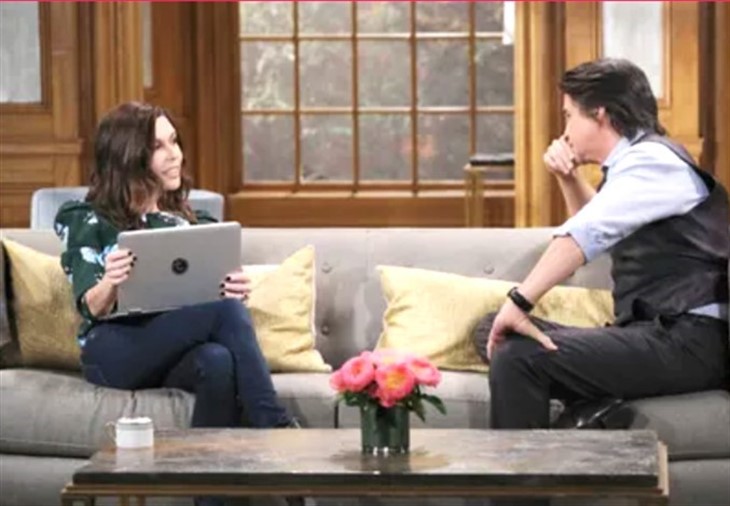 General Hospital viewers will recall that Finn felt betrayed when in front of the whole wedding party, Anna revealed that she had known about Peter August’s (Wes Ramsey) guilt, so that Maxie Jones (Kirsten Storms) would believe it was true. She also confessed she had known for a few months that her twin sister Alex Marick, (Finola Hughes) had been Peter’s birth mother, rather than herself. However, she had not confided this in Finn, her fiancé, but in Valentin Cassadine (James Patrick Stuart) her former WSB spy school classmate. Finn felt betrayed, and that Anna and Valentin had been “playing spy games” behind his back!

It seemed that Finn was more upset that she had confided in Valentin and left him out of the loop than anything else. She tried to explain that it was because Valentin had known Peter and tried to mentor him since he was a child, but had miserably failed and Peter had grown up to be a very evil, dangerous man in spite of Valentin’s efforts, and Anna now felt responsible too.

She had wanted to see the good in him and wanted to believe that Peter had changed, but had not listened to Finn the many times he had confronted her about what he saw and sensed; including when he had seen the files tying Peter to David Black, (Lon Gowan). He was the hit man that Peter himself hired to kill Franco Baldwin (Roger Howarth) and Dr. Andre Maddox (Anthony Montgomery) as he was trying to reverse the memory transfer of Drew Cain’s (Billy Miller) memories in the operating room. Then Peter killed the hitman, making himself seem a hero. These are the same files Peter burned in Anna’s fireplace.

General Hospital viewers will also recall that Anna tried to make up with Finn – but then just as they were having a very uncomfortable conversation, she got a call and had to leave. Finn didn’t think she had to leave, he thought that she chose to leave, putting the call ahead of him. It was Robert Scorpio (Tristan Rogers) telling her she had to get back to the ballroom because all heck had broken loose and everything had hit the fan! Again, obvious jealousy broke loose in Finn, with Anna having put her ex-husband ahead of him! Jealousy is a difficult beast to tame, and it stems from feelings of inadequacy and doubt.

Finn doesn’t feel he can trust Anna anymore and he doubts her love for him because she shut him out of the loop where the situation with Peter is concerned. He has doubts that he is good enough for her because although he is an investigator – a doctor who investigates rare infectious diseases – and has many of the same skillsets as Anna, he’s not a spy! The spy business seems to be more important to her than he does, and there is always an amount of secrecy that a “civilian” cannot be told when one is involved with a spy. It would be the same thing if she were a detective in the Port Charles Police Department, like his brother – who may be his son – Detective Harrison Chase (Josh Swickard) is. Will Finn ever be able to forgive Anna, or is “Fanna” over for good? Finn holds onto pain for a long time, so if he ever does makeup with her it may be a long time!