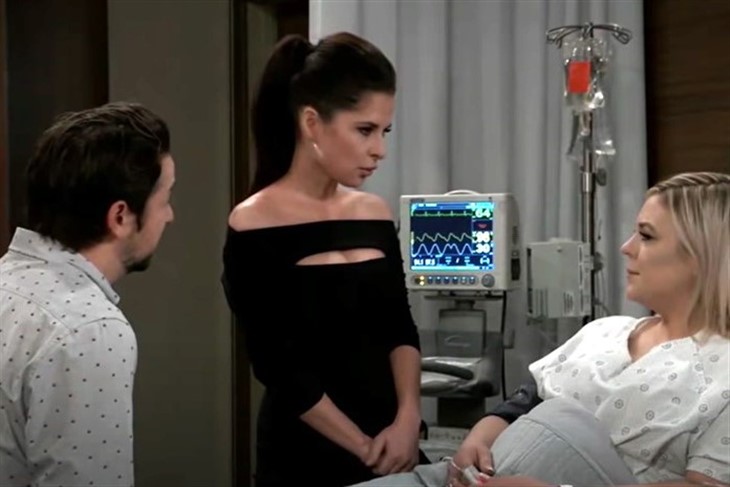 General Hospital (GH) spoilers tease that Maxie Jones (Kirsten Storms) will do what’s best for her baby in an upcoming episode of the ABC soap opera!

General Hospital viewers will remember that Maxie has had high blood pressure connected to her pregnancy and was told to avoid stress. Avoiding stress had been nearly impossible, given the events of the past couple of weeks.

First, her wedding didn’t happen, and slowly she had come to realize that it was for the best that it didn’t, and it hurt to realize that the things Peter August (Wes Ramsey) was accused of might be true. But since the wedding fell apart on GH, and she lost trust in many close friends, many of whom had known her since she was a child, she saw a side of Peter she had never seen before.

She wanted some space and he wasn’t having any of it; he had been willing to take her out of Port Charles even in her delicate condition, and it could have harmed not only Maxie but the baby as well! That was when she really saw how selfish he was and how he was more all about him than all about her and the baby!

It was painful to admit that she was wrong, but when even his mentor, Valentin Cassadine (James Patrick Stuart) seemed to turn on Peter, someone who had known him all his life, Maxie started thinking – once she realized she couldn’t realistically stay in denial about that. General Hospital spoilers tease the last thing Maxie wanted to do was give birth to another child with the father absent, but she finally realized that her kindly Dr. Jekyll was hiding a monstrous Mr. Hyde inside of himself!

According to GH spoilers, Maxie understandably thought she might be in labor when Dr. Britt Westbourne (Kelly Thiebaud) diagnosed her with Braxton Hicks contractions and late-term pregnancy high blood pressure. Even though she had two older children, it had been close enough to her due date that the onset of true labor had been very believable!

Maxie has had a lot of time to think now – to know how she really feels and to take a step back to gain some objectivity about Peter and her feelings for him. She had started feeling close to him almost immediately, although they didn’t actually get romantic for a couple of years.

It is possible that she could have transferred her love for Nathan West (Ryan Paevey) subconsciously to Peter, although not right away. All she knew is early on, she saw some of Nathan in Peter and sensed some familiar traits, habits, and other things, even though Peter and Nathan never actually knew each other.

General Hospital recaps and spoilers reveal Peter literally showed up shortly before Nathan was killed! Peter didn’t orchestrate Nathan’s death – but he did orchestrate the death of their birth father, Cesar Faison (Anders Hove)! If Nathan had not shown up to save her, he might still be alive – but then, she might be dead! Maxie realizes that she cannot let Peter meet their baby daughter let alone have any kind of custody! She must stick to her guns and not cave!