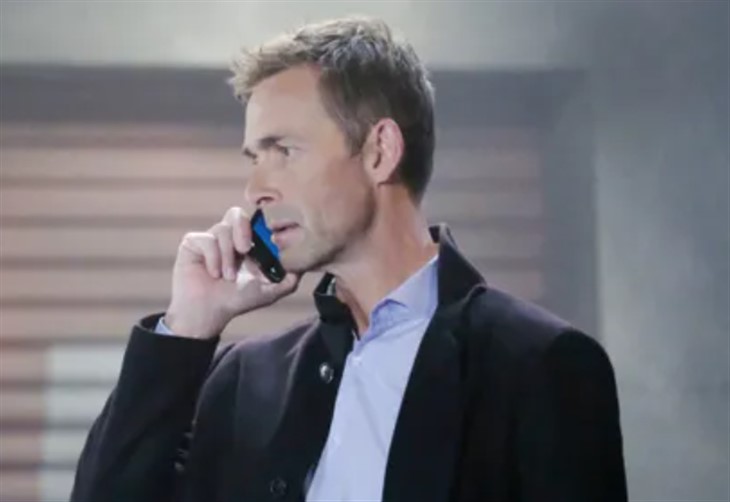 General Hospital (GH) spoilers reveal that Valentin Cassadine (James Patrick Stuart) will make an offer. He tries to help Nina Reeves (Cynthia Watros) by approaching Michael Corinthos (Chad Duell) with a deal. However, will Michael say yes or will Valentin be turned down flat? Keep reading to get the details on what’s happening during the week of March 15.

GH spoilers reveal that Carly Corinthos (Laura Wright) made her feelings about Nina being involved in Wiley Quartermaine-Corinthos (Erik and Theo Olson) clear. If it were up to her, Nina wouldn’t be able to see her grandson at all. However, Michael and Willow Tait (Katelyn MacMullen) extended an olive branch. It seemed to go well at first… until Nina crossed the line. Now she stands a real possibility of being completely excluded from Wiley’s life forever.

During the upcoming week, Valentine and Nina will reconnect. They will talk and Valentin will come up with an idea on how to help his former flame. Even though Nina initially declined his help, she will probably change her mind pretty soon. It is teased that Valentin approaches Michael with a shocking offer. Will he successfully strike a deal to help Nina stay in Wiley’s life? Or will Michael turn him down flat?

General Hospital spoilers reveal that Valentin and Michael are two completely different people. They don’t operate the same way and they don’t think the same way. So, whatever offer Valentin has for Michael will probably be rejected, especially if it has anything to do with Wiley. In Valentin’s eyes, he’s just trying to help Nina and thinks that the deal of a lifetime could benefit everyone. However, Michael doesn’t think that way. His only concern is Wiley and nothing will make him change his mind, except perhaps remorse and changed behavior.

He gave Nina a chance. However, the minute Michael, Willow, and Carly were out of earshot, Nina took advantage of it. Telling Wiley that Willow was not his real mom was completely out of line. She knew it too, which is why she said it after they left the room. She just wasn’t counting on the tyke repeating it… which is what kids that age do. They repeat everything.

As time goes by, Nina might realize that she won’t get another chance. This could have her becoming one desperate granny. She might even cross the line again and do the unthinkable to gain access to the child. She could end up surprising everyone by doing the unthinkable. Could she end up making a shockingly bold move? This might go beyond just being able to see him. Desperate people do desperate things… the question is just how far will she go?