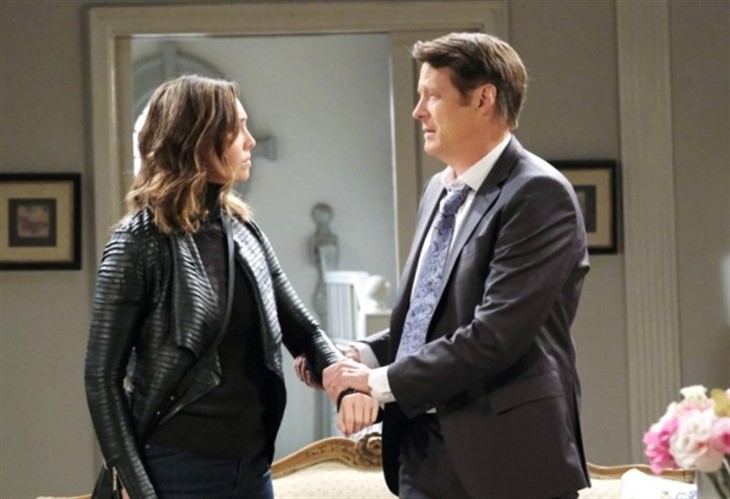 Days of Our Lives (DOOL) spoilers tease that in Salem Jack Deveraux (Matthew Ashford) is stunned when Gwen Rizchech (Emily O’Brien) admits that his other daughter, Abigail DiMera (Marci Miller) is the one who kidnapped her and tied her up in the wine cellar of the DiMera Mansion on an upcoming episode of Days of Our Lives!

Days Of Our Lives Spoilers – Abigail DiMera Had Some Help, But Gwen Rizchech Won’t Admit That

Days of Our Lives viewers will remember that Abigail had some help, but Gwen won’t admit that. She will put the blame totally on Abigail and likely not mention Gabi Hernandez (Camila Banus)! Gwen won’t feel it is in her best interests to do so, and besides, her main beef is with her sister, not her old rival for Jake DiMera (Brandon Barash). Gwen could care less about reconciling with Jake, he was just a means to an end. The only reason she would want him back is to get in the running for the DiMera fortunes, but the Deverauxs have a great deal of money of their own.

Days Of Our Lives (DOOL) Spoilers: Will Lani And Eli Have The Heart To Crush Paulina’s Godmother Hopes?

Now that she’s in good with dear old dad, she knows she can depend on him for the lifestyle she deserves, and she will continue to try and do exactly that! One thing she wants to do, however, eliminates her competition – in other words, Abigail. She knows she has to tread lightly in doing this, however, because Jack loves his other daughter too. Gwen still maintains her innocence in the death of Laura Horton (Jaime Lyn Bauer) but it is absolutely true that Abigail kidnapped her and would have even injected her with the same drug that Gwen injected her with, which was originally blamed on Gabi! Gabi, however, stopped Abigail in her tracks; that could ruin any chances of getting the truth out of Gwen about her suspected role in Laura’s death! Gwen would do well to keep Gabi out of her narrative!

Days Of Our Lives Spoilers – Jack Deveraux Will Be Stunned

Jack has seen his daughter go through some pretty rough times, including a serious bout with DID, or dissociative identity disorder! Abigail at one time had several alters, one based on Gabi and the other based on her grandmother Laura! Gwen knows about the alters too, having done extensive research on not only Jack, but the whole family. Gwen still hates Abigail for being the “favored daughter” even though they were not raised together. Gwen may put an idea in Jack’s head that a violent alter has emerged who attacked her! But Jack will be stunned enough when she tells him that Abigail kidnapped her and tied her up in the wine cellar. Jack knows that Abigail blames Gwen for Laura’s death, even though Jack still believes Gwen that it was an accident. Days of Our Lives viewers will remember that Gwen waited an awfully long time before she called Jack, possibly to make sure that Laura was dead by the time he got there.

Days Of Our Lives Spoilers: Chloe And Brady Push Rex Brady To Fight To Get Sarah Backhttps://t.co/ksw7hVuezl

She appeared to have waited all night long until the morning, although she may not have meant to kill the older woman – after all, she was sitting on the floor appearing to be in tears. For sure, it happened during their struggle – but whether it was an accident or not, the only witness besides Gwen is dead! Jack will worry about Abigail, once Gwen tells him about the abduction and she may tell him she would have attacked her with a syringe – possibly crediting Gabi with saving her life. Jack will be convinced that Abby is going off the deep end again, and he won’t be the only one!