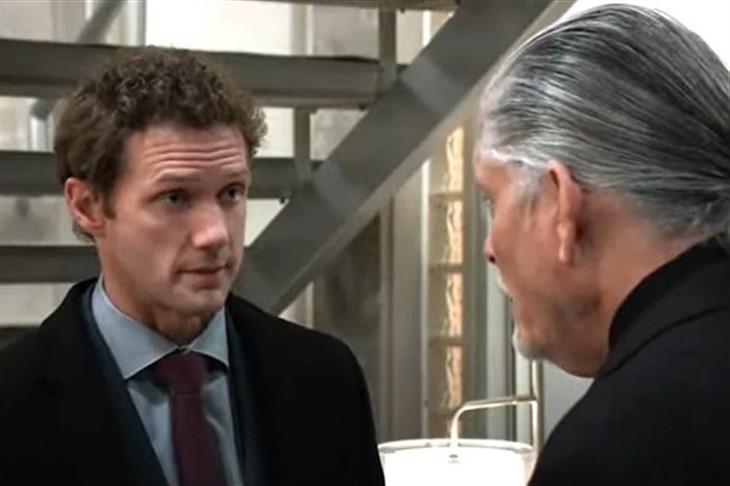 General Hospital (GH) spoilers tease that in Port Charles, NY Peter August (Wes Ramsey) will make an unexpected ally in upcoming episodes of General Hospital. It seems the most likely might be Cyrus Renault (Jeff Kober) – but could it be someone else?

Cyrus and Peter do have a common enemy – and that is Jason Morgan (Steve Burton). However, Cyrus’s interest in Peter may not be as two partners on equal footing. Cyrus might want Peter to act as his hitman! Peter has successfully been able to rid himself of enemies with leaving no trackback to himself, although Cyrus is not exactly in the loop there. Valentin Cassadine (James Patrick Stuart) and Anna Devane (Finola Hughes) totally exposed Peter at his wedding to Maxie Jones, (Kirsten Storms) which of course didn’t happen. However, Peter has many overseas allies that Cyrus may not.

Cyrus’s allies are all in the United States, at least those that are known to be his allies. Cyrus may be good – but he’s not that good. His tactics are nothing compared to some of Peter’s friends in the DVX! Cyrus has a cover of being a philanthropist but wants to run his new drug, the one that almost killed Sasha Gilmore (Sofia Mattsson) through General Hospital, and now that plan has been foiled. He may have some leverage to try and force Peter to work with him, however. The article that Jackie Templeton (Kim Delaney) wrote after talking to Cyrus’ mother, Florence Grey (Annie Abbott) that made the General Hospital board turn down Cyrus on sending his drug information to the FDA (Food and Drug Administration) for approval was published in Peter’s paper, “The Invader”! Cyrus has more than Jason Morgan to try and “bargain” with Peter about!

Peter has no interest in being a hitman for Cyrus, and he cannot be “leveraged”. Even Cyrus doesn’t know what he’s getting into thinking he can successfully tangle with Peter! However, Peter knows all of the overseas drug routes and a company who might take Cyrus’ drug over there. A mutual business associate of Peter and Valentin Cassadine (James Patrick Stuart) from his mercenary days had a large and thriving drug manufacturing operation and the routes to go with it. Peter tells him about Cassandra Pierce (Jessica Tuck) who may or may not really be dead, and also about another old friend of his and his late father’s, Jerry Jacks (Sebastian Roché) who also was heavily involved in the drug trades overseas, both legal and illegal!

Cyrus raises an eyebrow at the name “Jacks” which Peter confirms is Jasper Jacks’ (Ingo Rademacher) brother! Jax hasn’t heard from him in years but Peter knows where he is! Jerry escaped from Steinmauer in 2019. Peter tells him about the time that Jerry contaminated Port Charles’ water supply with a toxin, and held the city ransom for the cure for it! Peter, like Cyrus, prefers to keep his nose clean and doesn’t want to draw any more suspicion to himself than there already is. So, while Peter turns Cyrus down for a partnership, he is happy to make referrals!