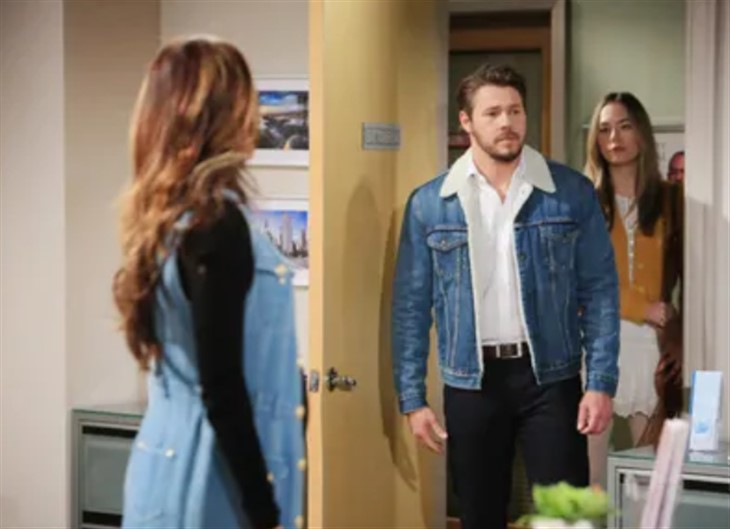 The Bold and the Beautiful (B&B) spoilers reveal that Steffy Forrester (Jacqueline MacInnes Wood) is finally over Liam Spencer (Scott Clifton). For the first time, she is truly ready to move on with John Finnegan (Tanner Novlan). The actress explains that Steffy may have finally broken the vicious cycle of allowing Liam to use her to waffle between women.

The Bold And The Beautiful Spoilers – Hanging Onto Liam Spencer

B&B spoilers reveal that both Steffy and Hope Logan (Annika Noelle) have a tendency to hang onto Liam. A few weeks ago, Noelle told Soap Opera Digest that it’s due to Hope being traumatized by Brooke Logan Forrester (Katherine Kelly Lang) and Taylor Hayes (Hunter Tylo). The actress explained that Hope does not want to be like her mother.

As for Steffy, she has also hung onto Liam even after their divorce. She was married to the man and they share a child together, Kelly Spencer (Colette and Avalon Gray). It was once stated that Steffy couldn’t let go because she was grieving the family she thought she would have. Finn knows this and at one point mentioned he hoped Steffy could let go of Liam 100% one day.

When Finn proposes to Steffy, she will still insist on going to Paris and letting him go. That is when Finn explains why she doesn’t need to do that. That is when he finally tells her that Liam isn’t the father. All this time, Finn was the baby daddy. Then, Finn goes into the explanation of Vinny Walker (Joe LoCicero) tampering with the paternity test and Thomas Forrester (Matthew Atkinson) figuring out the truth.

The Bold And The Beautiful Spoilers – Steffy Forrester Breaks The Cycle

The Bold and the Beautiful spoilers from the new issue of Soap Opera Digest reveals that Steffy is finally free. Wood explained that Steffy has finally broken the cycle that Liam trapped both her and Hope in for years. Now, she can finally move on with Finn, a man who loves her and only her.

The soap star also teased what this means for Steffy’s future. She told the publication,

“It’s confusing and it’s strange, but hopefully now, the cycle with Liam has finally been broken and she’s able to be free.”

What do you think of what Tanner Novlan and Jacqueline MacInnes Wood said about “Sinn”? Are you looking forward to the couple getting married? What do you think is going to be next for Finn and Steffy as they start their lives together? We will have to keep watching the CBS soap to find out what happens next.