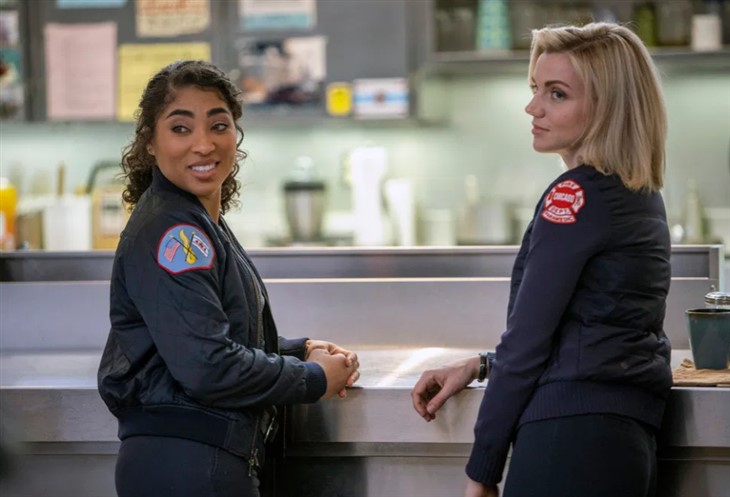 The new Chicago Fire promo begins with Chief Wallace Boden (Eamonn Walker) calling a team meeting in his office. Present are Gallo, Ritter, and Mackey, although Mouch is not seen in this particular shot. Boden tells them there was a little mixup at headquarters, which has had him scrambling, and the bottom line is that three of them need to report for TRA (Technical Rescue Awareness) training to Firehouse 33.

Chicago Fire spoilers tease Ritter answers and says no problem, and asks when? Boden says now, and they have thirty minutes to get there. Gallo and Mackey look at their watches as Ritter says “oh”. Chief Boden continues and apologizes for the short notice.

He tells them that they should have given him more notification but someone spelled his name wrong in the email he received. They had it going to “Chief Bowden” instead of “Chief Boden”. He smiles as he says he has been scrambling for Florida, apparently having arranged a vacation for himself and his family, all morning since he arrived at work, and says he’s sorry.

Mackey tells him no problem and smiles. She says they’ll head out and he thanks them. Just as Boden starts to make a phone call, in walks Mouch, late, and tells him he heard he had been looking for him. Boden says yes, and has some questions for Chicago Fire’s Mouch.

He wants him to please tell him why he didn’t take the TRA training class five years ago when he was supposed to. Mouch looks confused; he says he’s pretty sure he did; Boden says no, he did not! Mouch says huh – he takes a deep breath and tells Boden that’s a puzzler! Boden says oh, and tells him to report to Firehouse 33!

Mouch tells him copy that! He starts going out the door and then asks Boden when he meant, Boden tells him NOW Mouch, and he protests! He tells him, oh no, he was not something he planned to do – Boden’s stern look sends Mouch on his way!

Next, Chicago Fire episode 9 spoilers show Captain Matt Casey is injured while at a fire call as a car runs into him as he’s trying to cross a street. Kelly Severide (Taylor Kinney) rushes to assist as Stella Kidd (Miranda Rae Mayo) also joins in. Matt claims he’s fine, but it’s plain he is in a lot of pain as he holds the side of his head!

Casey obviously is experiencing some symptoms with his eyes as he flushes them with water; he walks over to tell Sylvie Brett (Kara Kilmer) hello near the lockers, but her paramedic training kicks in.

She can tell there’s something wrong as she looks at him, and he exhibits a blank stare! It looks like Casey may have suffered a serious head injury, possibly a bad concussion, or even swelling of the brain. Sylvie knows that he needs to go to Chicago Med on the double, but will she be able to convince him to let her and Stella take him in the squad before he passes out? Stay tuned!

Stay tuned to Chicago Fire, and keep checking Chicago Fire spoilers frequently for all the latest news, updates and developments!  Let us know what you think of tonight’s episode, “Double Red.”