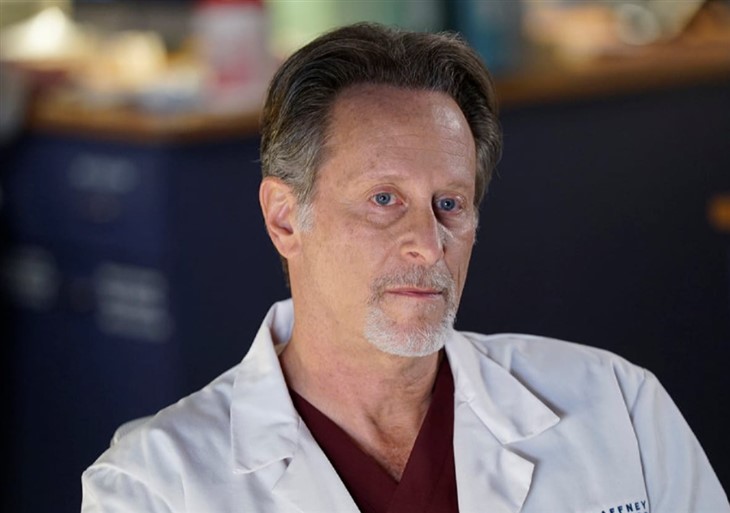 Chicago Med spoilers tease that in the next episode, season 8 episode 9 “All For The Want Of A Nail” Maggie Lockwood (Marlyne Barrett) deals with her own trauma but finds time to step in to help a mother in need. Meanwhile, new doctor Dr. Dean Archer (Steven Weber) stirs the pot with more than one doctor, busting Doctors Natalie Manning (Torrey DeVitto) and Dr. Crockett Marcel (Dominic Rains) for dating to Dr. Ethan Choi (Brian Tee). Also, a patient comes to Chicago Med needing treatment immediately, but doesn’t want it from them!

Chicago Med viewers will recall from last week’s episode, that Dr. Dean Archer was formerly Dr. Ethan Choi’s office while he was in the military. Ethan had a talk with him to step back and let Ethan be the lead last week. But it seems like Archer cannot quit acting like a military officer as he witnesses Doctors Marcel Crockett and Natalie Banning acting like a pair of lovers. He busts them for breaking protocol to Ethan and tells him that they are secretly dating.

Ethan addresses the situation with Natalie, telling her that if she and Crockett are seeing each other, they will need to go to Human Resources and declare that is the case! Later, Natalie and Crockett discuss the situation after performing surgery, with an angry looking Natalie seeming resistant, but Crockett shrugging it off, telling her so they’ll go to HR, unless, that is, she has reservations! Chicago Med viewers will remember that Natalie and Crockett are very involved, and have been for quite some time! Natalie’s obviously upset that someone at Med would report them!

Chicago Med Spoilers – The Patient Shot Herself In The Foot

In another area of the hospital, Dr. Will Halstead (Nick Gehlfuss) looks at his tablet as he approaches the Nurses’ Station where Nurse April Sexton (Yaya De Costa) is standing. She calls out to him, telling him she has some free time now if he has any updates on the clinical trial he has been working with.

Will tells April the last few days he’s just been combing through data since it is kind of a one-person job. April offers to help, telling Will that maybe she can search the recent patient files, and see if any of them are good candidates. Will tells her sure and nods his head. He says that would be great, then they both turn towards the emergency room as an incoming patient’s alarm sounds.

The patient is brought in on a gurney by some paramedics, telling Will and April the patient’s name is Ramona Davis (uncredited actress), she’s thirty years old, and her blood pressure 122 over 80, HR 115, and sats 100 percent. Will says come on, what happened? Ramona says her foot is in excruciating pain. One of the paramedics tells Will that the patient called 911 after shooting herself in the foot with a nail gun. Will asks how Ramona got that gash in her head – the paramedic says she was passed out when they found her.

Ramona says it was because she hurts so bad. Will tells her they will take good care of her and give her something for the pain. They start assisting and treating her, but then she asks where she is – Will tells her Chicago Med. Ramona says she was supposed to go to East Mercy, and breaks loose and runs! Also, Maggie steps up to help a mother in need while dealing with her own trauma!

Stay tuned to Chicago Med, and keep checking Chicago Med Spoilers frequently for all the latest news, updates, and developments!