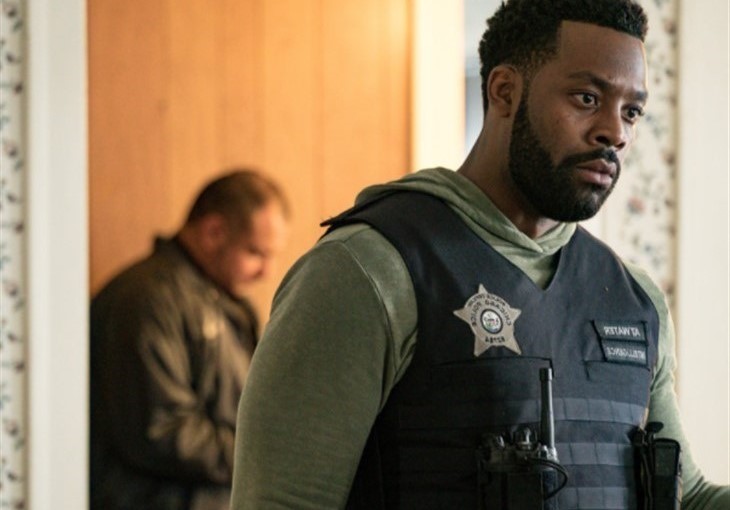 Chicago PD spoilers for Season 8 Episode 9 tease that when a local business owner is gunned down in his shop, it becomes personal for Detective Kevin Atwater (LaRoyce Hawkins, who patrolled the neighborhood as a young cop.

There is a new rookie being trained in Hank Voight’s department and Jay Halstead (Jesse Lee Soffer) warns him to stay on point and explains they are watching, but not too close. The rookie goes undercover as a drug dealer, pulling out a pack of cocaine as he walks with another man down the sidewalks of Chicago in a residential neighborhood.

Atwater warns the rookie if he doesn’t think he can handle it, he needs to step aside! He also warns him not to travel, or to go too far away from the vehicle where Atwater and Detective Adam Ruzek (Patrick John Flueger) are monitoring his wire! But he does, and he’s gone out of range.

Atwater is upset when he says he and Ruzek have lost the feed, and the rookie is on his own now! He appears to be in an old abandoned warehouse with two suspects, and one of them shoots! If there’s anything that a cop should never do, it is to put himself in danger by not being close to back up!

Chicago PD spoilers tease Atwater and Ruzek saw the building where the new rookie entered, but since they cannot hear what’s going on they will have to go in after him! This new rookie has put the whole case in jeopardy by going rogue, out on his own, having way more nerve than experience and now he’s missing!

On another case, things get personal for Atwater. A business owner is gunned down in his shop in his old neighborhood, where Atwater grew up! He may have known the business owner personally, and this may be a shop he frequented as a kid.

Chicago PD viewers will remember this isn’t the first time a case got personal for Atwater, and it isn’t the first time he has had to investigate cases where he grew up. This case may be related to the one that the new rookie put in jeopardy, and Hank doesn’t like it. Neither do Atwater, Ruzek or Halstead! Because the rookie went out on his own the rest of the team has to backtrack and try to get new evidence to bring the suspects in.

But as any detective knows, once someone has been made, the perpetrators get nervous and suspicious of anyone else that comes in, because if one was a cop, his friends have probably followed! That means trouble for the criminals and danger for the cops!

As for the rookie, will he live, or will he die? Will he continue on this case or in Hank’s detective unit, or maybe be demoted to desk duty or filing papers for Trudy Platt (Amy Morton)?! Chicago PD viewers will have to tune in Wednesday March 17 to “Impossible Dream” to find out!

Stay tuned to Chicago PD and keep checking Chicago PD spoilers frequently for all the latest news, updates, and developments!