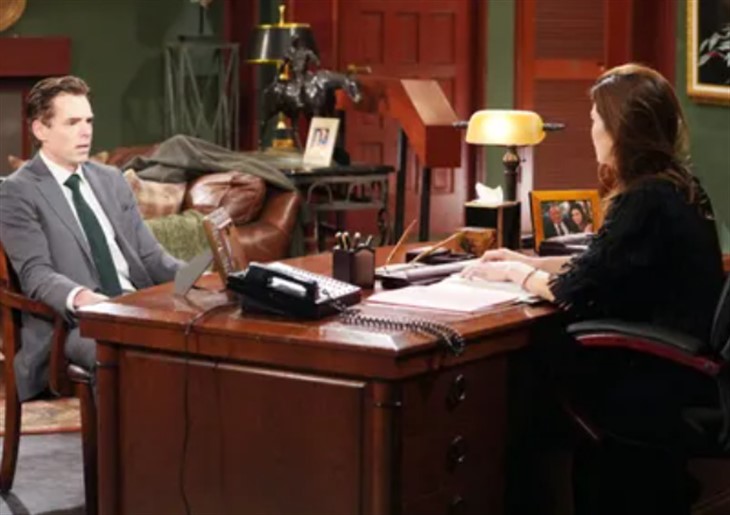 The Young and the Restless spoilers document that Victoria Newman’s (Amelia Heinle) unexpected admission to Billy Abbott (Jason Thompson) has the potential to create mega drama in Genoa City, Wisconsin.

Billy’s mind was stirred by a comment Victoria offered at the Grand Phoenix Hotel. Mixed into the multiple meetings with Ashland Locke (Richard Burgi) was Victoria’s tell to her multiple-time ex-husbands that she wanted to protect him.

A later meeting at Newman Towers proved intriguing, as Victoria said that she still loved Billy. He was stunned by the unexpected admission.

Billy decided that he needed to move beyond Villy. While he loved Victoria and loves their children completely, Billy felt a change was needed in order to pull himself from what seemed like a dysfunctional cycle.

Victoria was angered by Billy’s decision. She got over it but also calculated that he would eventually return. That perspective was challenged when Lily Winters (Christel Khalil) entered the frame.

Thompson’s character has fallen in love with Lily and the feeling is mutual. Victoria senses that Villy might not be coming back, as she assumed.

Billy and Victoria’s love for each other isn’t reasonably questioned. But there is no doubt that Villy had its limitations during each incarnation.

One of Y&R’s top pairings of the 2010s also broke differently when Billy ended the last edition of Villy. Fans of that couple and Billy knew that a threshold was crossed. Victoria disagreed and has been inserting herself into Billy’s life in order to try and make her Villy rebound prophecy come true.

Y&R has established a cool conflict, with three entities vying for Ashland’s influential media company. Burgi’s chilling character liked Victoria’s pitch and the person who made it, with the implication being that he’s interested in more than business. That was the wink when Ashland asked her to dinner and didn’t want to include Tara Locke (Elizabeth Leiner).

The Young And The Restless Spoilers 2 Weeks Ahead: Devon Busted, Amanda Finds Proof On Disheveled Couchhttps://t.co/Fj4kW5QGCu

Hardcore viewers know that Victoria has acted out in response to Billy before. So, could she and Ashland become involved? Of course.

If the above connection happens it likely wouldn’t make Billy jealous. Instead, Victoria would be demonstrating that she wasn’t solely tied to him. Whether Ashland would also be teaching Tara a lesson is yet to be learned as well.