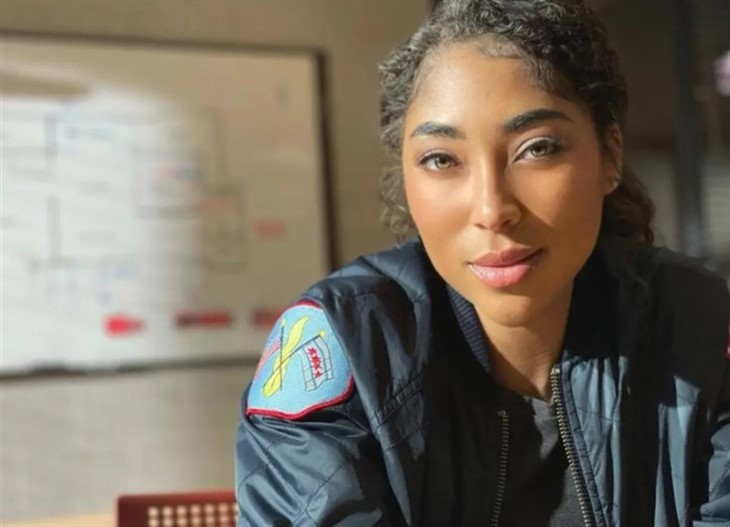 Chicago Fire spoilers tease that with Paramedic Gianna Mackey (Adriyan Rae) exiting the Chicago Fire canvas in the most recent episode, “Double Red” there is lots of speculation as to whether Gabby Dawson (Monica Raymund) may be returning.

In the most recent Chicago Fire episode, Firehouse 51 said goodbye to Paramedic Gianna Mackey, who had been Paramedic Sylvie Brett’s (Kara Killmer) partner. Previous to Gianna, Gabby had been her partner, and before leaving for Puerto Rico, she had quit being a paramedic and had started being a firefighter. As in Monica Raymund’s case, Adriyan also had some “private reasons” for leaving the show, which is usually assumed to be wanting to explore other acting opportunities. Most actors, for contract reasons, want to finish one role before looking for another.

Showrunner Derek Haas says they had fun writing the connection between Gianna Mackey and Joe Cruz (Joe Minoso) and they are sure they will have fun writing for whoever replaces Mackey. As for Paramedic Mackey, she left for a better job where more advancement opportunities were available. Haas did volunteer that they loved Adriyan on Chicago Fire and he was sure she would be great on “some other series”.

They also left the door open for her to return at some point, whether on Chicago Fire or a future spinoff or crossover. He didn’t think they’d seen the last of her. However, saying goodbye to Mackey will likely bring back some unresolved feelings of loss for Gabby, even though she has popped back in for the occasional visit. The same loss was played out in season one, when Sylvie Brett replaced Leslie Shay (Lauren German) who died.

Gabby’s presence has been felt intensely this season as a potential romance between her best friend Sylvie and her ex-husband Matt Casey (Jesse Spencer) has been tested. Sylvie has hesitated even though she has attractions towards Matt because of her friendship with the absent Gabby, and Matt seems to still be carrying a torch for Gabby even as he has tried to romance Sylvie!

To complicate matters, newcomer Lieutenant Greg Grainger (Jon Ecker) has been flirting with Sylvie, and she’s asked Grainger out while Matt fumed with jealousy! Matt has also been taking out his jealousy on Grainger, and Sylvie has told Matt very bluntly that he needs to sort out his still obvious feelings for Gabby before starting something with someone else and taking his frustrations out on others!

As far as a Gabby return, Haas says the door has been left open for her as well. He has nothing but love, admiration, and respect for Monica Raymund, and anytime she wants to “swoop in” and steal their hearts she is perfectly welcome to do so! He said he had some plans but they are schedule-dependent so he doesn’t want to reveal something and then the plans have to be scrapped.

Jon-Michael Ecker: Who Is The Chicago Fire Actor?https://t.co/LxcP8n0fNL

Haas is definitely looking towards the end of the season, which apparently has not yet been filmed, to sneak in a Gabby appearance. He also says Grainger will stay long-term to add to the drama, Stella Kidd (Miranda Rae Mayo) will focus on taking the lieutenant’s test, and there will be a big finale to the season, which is shorter than usual because of the coronavirus pandemic. It may or may not include Cruz and his wife’s impending blessed event! Haas did say that the finale will be very dramatic, and “rough”!

Stay tuned to Chicago Fire, and keep checking Chicago Fire spoilers frequently for all the latest news, updates, and developments!