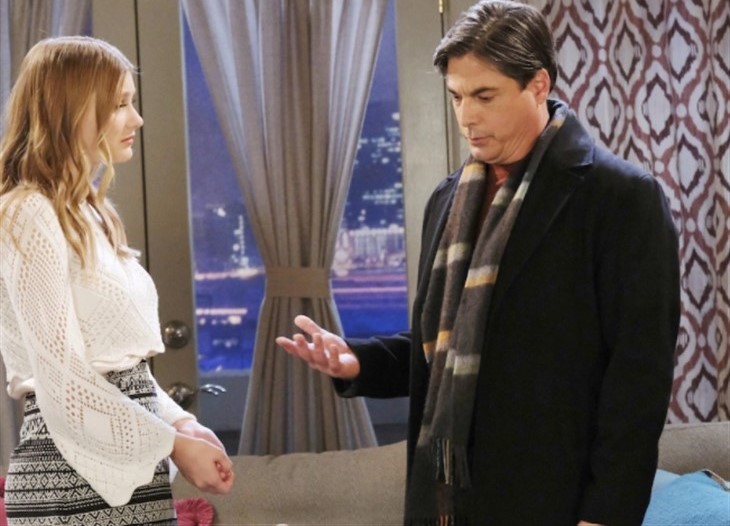 Days of Our Lives (DOOL) spoilers & rumors tease that Allie Horton (Lindsay Arnold) will come clean with her father, Lucas Horton (Bryan Datillo) about something in an upcoming episode of Days of Our Lives.

Might it be that she killed her rapist, Charlie Dale (Mike C. Manning) and her mother, Sami DiMera (Alison Sweeney) was trying to cover up for her when Rafe Hernandez (Galen Gering) stumbled upon her at the crime scene?

Days of Our Lives viewers will remember that Charlie was threatening to take his son, Henry Horton (Jayna and Kinsley Fox) because he was all he had left that might love him. It was probably more of a power grab, however. If Charlie had gotten ahold of Henry and had him hidden away somewhere, he could have wound Allie, Sami, and just about everybody else around his little finger and also use the baby for leverage!

Charlie knew he was going to walk for the rape anyway, and though he could also walk away from charges for kidnapping his mother, Ava Vitali (Tamara Braun), and drugging her. All he had to do was pull the crazy card and say she was not a reliable witness. After all, she was hospitalized and no one could prove he either kidnapped or drugged her! If someone had not seen to it that Charlie paid for his crimes, he would have gotten away scot-free, and obviously, someone could not have that happen!

Someone on Days of Our Lives wanted to see Charlie pay, and wanted revenge, and Sami was the most likely suspect because when Rafe showed up, she was walking out of the bathroom with a towel, and it was her fingerprints that showed up on the murder weapon! Both Sami and Allie had means and motive – but did Allie have opportunity?

DOOL recaps show Allie had tried shooting someone before, and that does not rule out her shooting someone else for basically the same reason! She had started to take a page from her mother’s playbook and was intending to shoot Tripp Dalton (Lucas Adams) in the family jewels and would have, had Ava not arrived just in time to stop her!

So why would she not have tried the same thing with Charlie? He wasn’t shot there, but whoever shot him was shooting to kill, not just to disable! He appeared to have been shot in the heart at very close range!

Days Of Our Lives Spoilers: Ciara Attacks Claire, Furious About Her Last Memoryhttps://t.co/bFAtWyaNmY

Days of Our Lives rumors hint Allie could have taken her grandmother Kate Roberts’ (Lauren Koslow) gun although the gun has not yet been traced to a suspect. She took Kate’s gun when she tried to shoot Tripp, so Kate may have made sure her gun was locked up. However, guns are pretty easy to find in most pawn shops and she could have purchased one.

Allie may have even purchased a gun new for her own protection since there are dangerous people in Salem frequently. DOOL recaps show Charlie had tried to harm Allie’s cousin Claire Brady (Isabel Durant) shortly before he was killed, and Allie may have decided she should get some protection and learn how to use it. But if Allie didn’t do it, and Sami didn’t do it, they might know who did – and Allie could either be confessing her own crime or someone else’s to Lucas!