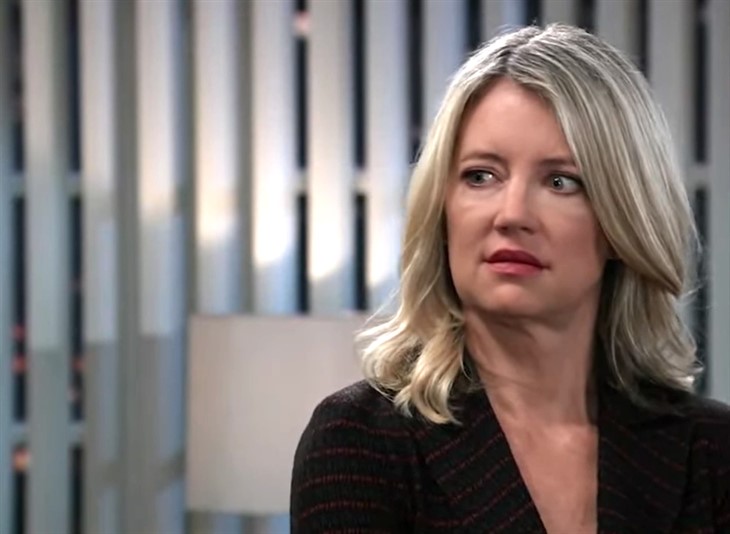 General Hospital (GH) spoilers and updates reveals Nina Reeves (Cynthia Watros) is ready to take a break from the drama in PC. Life hasn’t been easy for Nina these past few months. First, after a years-long quest to find her long-lost daughter, Nina discovered that Nelle Benson (Chloe Lanier) who had recently died, was the woman she had been searching for all this time.

While not turning a blind eye to all of Nelle’s misdeeds, Nina has been torturing herself wondering if Nelle would have turned out differently had they been together as mother and daughter. To make matters worse, Nina’s relationship with Jasper “Jax” Jacks (Ingo Rademacher) fell apart because Jax had known about Nelle and chose to keep Nina in the dark.

General Hospital spoilers tease after hearing the details about the night Nelle died, Nina is convinced that Carly Corinthos (Laura Wright) could have saved Nelle, but didn’t. This was another secret that Jax had kept from Nina, choosing instead to protect Carly, as is typical for Jax. Nina has vowed to make sure that Nelle’s son with Michael Corinthos (Chad Duell) will be a part of her life. Michael had already had similar ideas, and he and Willow Tait (Katelyn MacMullen) brought young Wiley Corinthos (Erik and Theo Olsen) to see Nina.

As happy as Nina was to spend time with Wiley, she decided to take it upon herself to tell Wiley that Willow isn’t Wiley’s real mommy. She wasn’t trying to be malicious, but Nina’s words caused enough trouble that Michael decided for the time being that Nina shouldn’t be a part of Wiley’s life. Nina is devastated but she knows that she overstepped and will have to prove she can be Wiley’s grandmother without trashing anyone else.

GH Spoilers – Nina Reeves Could Definitely Use Some Time Away From Port Charles!

After attending her old friend Franco Baldwin’s (Roger Howarth) memorial service, Nina decided she needs to clear her mind. But where will she go? Chances are, Nina will ask her old nurse, Phyllis Caulfield (Joyce Guy) if she can come for a visit. Phyllis still feels a bit guilty for helping to give Nina’s baby away in the first place, although she was told that’s what Nina would have wanted so she is likely to agree. But once General Hospital Nina gets to Phyllis’ place, she will realize that she can’t escape Port Charles so easily. As viewers are aware, Sonny Corinthos (Maurice Bernard) is suffering from amnesia and going by the name “Mike”, but as fate would have it, he is also staying with Phyllis. But as far as anyone in Port Charles knows, Sonny is presumed dead.

General Hospital Spoilers – Will Nina Reeves Tell Anyone That She Knows Who “Mike” Is?

Nina’s first inclination, unfortunately, will be to make Carly pay for not saving Nelle. So she won’t let anyone know that she knows “Mike”. But Nina isn’t a malicious person at heart and will wrestle with telling “Mike”, as well as everyone else, his true identity. But something will still hold Nina back. Could she and “Mike” be starting to have feelings for each other? She may not be willing to give “Mike” up, especially to Carly. This is bound to get messy because Sonny won’t have amnesia forever, and will eventually realize that he already knew Nina and that she kept his identity from him. But by then, Sonny may realize that he has come to care for Nina as well!

Is Nina’s plan to get away from Port Charles going to backfire in a big way? Will Nina befriend Sonny but keep him in the dark about his true identity? Is Nina malicious enough to let Carly continue to believe her husband is dead? Or will Nina and “Mike” embark on a new romance that neither one of them wants to give up? Sometimes fate just has other ideas in Port Charles, so stay tuned to General Hospital airing weekdays on ABC. And don’t forget to check back right here regularly for all your General Hospital news, information, and spoilers!