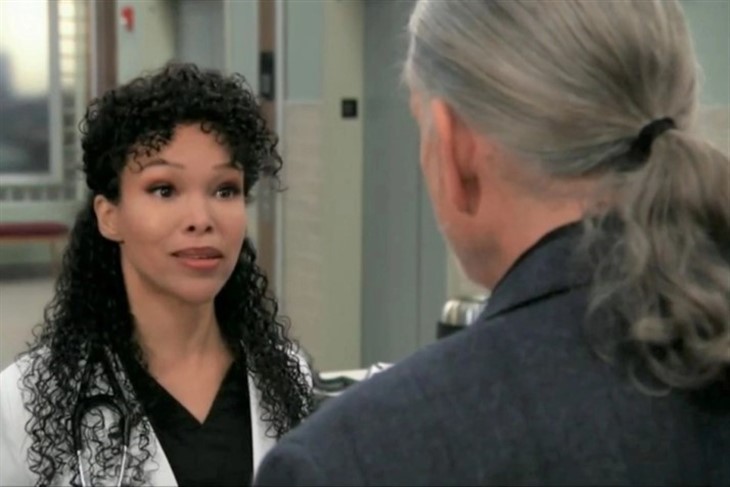 General Hospital spoilers and rumours reveal Portia Robinson (Brook Kerr) has not lived in Port Charles for long. She came to Port Charles to be with her daughter Trina Robinson (Sidney Makayla). She was married to Marcus Taggert (Real Andrews). She had an affair with Curtis Ashford (Donnell Turner) while she was married to Taggert around the time that she got pregnant with Trina. Portia has not told Taggert or Trina about the affair. She has assured Curtis that Taggert is Trina’s father.

Portia and her loved ones have been dealing with Cyrus Renault (Jeff Kober). He is a mob boss who came to Port Charles to set up his drug operation. Cyrus wanted to get revenge on Taggert, Jordan Ashford (Briana Nicole Henry), and two other agents because they sent him to jail with false evidence. Cyrus was able to get his freedom because he was cleared of the charges. Cyrus found a way to get to be the Chairman of the Board at General Hospital.

Portia is a doctor at General Hospital. She has been trying to work with Cyrus but it has been difficult. Taggert had to fake his death because Cyrus had kidnapped Trina and her friend Cameron Webber (William Lipton). Taggert wanted to keep Trina and Portia safe. Taggert had been working with Sonny Corinthos (Maurice Benard) and Jason Morgan (Steve Burton) against Cyrus.

Sonny and Jason have their own mob organization and want Cyrus to leave Port Charles. Sonny was trying to deal with a situation that Cyrus set into motion. Cyrus got Julian Jerome (William deVry) to set a bomb at the Floating Rib to take out Jason. However, the plan failed. Sonny went to find Julian to see if he would turn on Cyrus. They ended up on the bridge in New Jersey which they both fell from. Sonny has been declared dead by his loved ones.

Sonny was found and brought to a hospital in Nixon Falls, Pennsylvania. He met Phyllis Caulfield (Joyce Guy). Phyllis helped to treat Sonny who has amnesia. Sonny believes that his name is Mike because it was the name on the watch that he was wearing. Phyllis did not want Sonny to be alone and decided to bring Sonny back to her family business The Tan-O. Sonny met her husband Lenny Caulfield (Riff Hutton). At first, Lenny was concerned about Sonny. However, Phyllis realized that Sonny was bipolar. She helped Sonny get the medication that he needed. Lenny and Phyllis have become close to Sonny. Recently Phyllis told Sonny that she and Lenny do not have children because their daughter had died. Phyllis has been helping people to find a home because she lost her daughter.

General Hospital Phyllis is sure that her daughter died. However, it could be possible that her daughter survived. It might be that for some reason Phyllis and Lenny’s daughter could have been swapped with another girl. Could Portia be the daughter that they think that they lost? Portia has not talked about her parents. She may not know that they are not her real parents. Could Portia find out that Lenny and Phyllis are her real parent? Would Lenny and Phyllis come to Port Charles to reunite with Portia if she is their daughter? Tune into General Hospital to find out if Portia, Lenny, and Phyllis make an unexpected family connection.