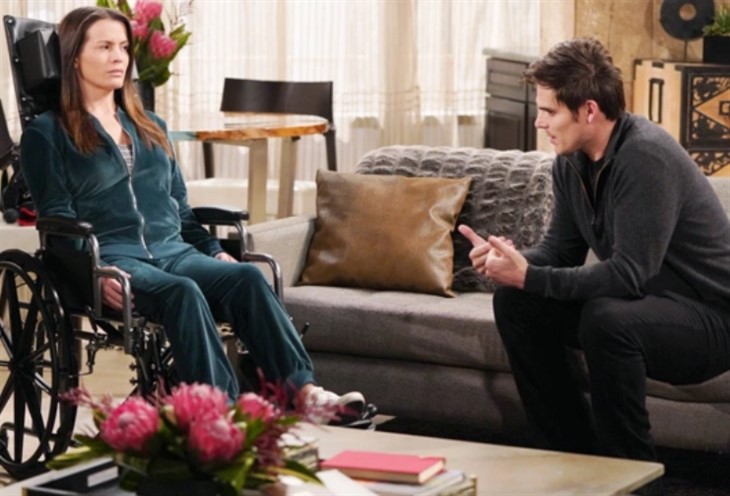 The Young and the Restless (Y&R) spoilers document that in Genoa City, Wisconsin Chelsea Lawson’s (Melissa Claire Egan) plan won’t go as she hoped. Her intent was to make Adam Newman (Mark Grossman) believe that she was still paralyzed and couldn’t speak. His catch of her moving in the wheelchair changes the game.

Chelsea chose to believe that Adam still had feelings for Sharon Rosales (Sharon Case). That instinct was questionable, despite Shadam’s history and more recent interaction.

However, Chelsea proved to be totally right about the man who claims to want Chadam to stay together. Her resulting plan to exact hard-hitting revenge is endangered by Adam’s awareness of her recovery.

The Young And The Restless (Y&R) Spoilers: Tracey E. Bregman Has Something To Celebrate

The Young And The Restless Spoilers – Couple’s Therapy Needed

Some, including Chelsea and maybe Adam as well, would reject the notion that Chadam would benefit from couple’s therapy. But that’s what a pairing who was honest with each other and projected trust would do.

No one can blame Chelsea for wanting to escape Adam’s clutches. He’s the one who had her kidnapped, which arguably led to the stroke and temporary paralysis, and loss of speech.

As for Adam, he truly doesn’t know which woman he loves more completely. Chelsea is the mother of his son, Connor Newman (Judah Mackey). She’s also the person who has been a better influence on him than anyone other than his mother. But Sharon has an inarguable place in his heart.

It’s reasonable to speculate that Chelsea has involved in Rey Rosales’ (Jordi Vilasuso) poisoning based on her recent text gaslighting Sharon. However, there are other possibilities, including any one of the young tormentors Faith Newman (Alyvia Alyn Lind) recently turned into her school’s authorities.

Clearly, Chelsea is trying to pit Adam and Sharon against each other. That represents her deeper desire to break their bond. But it also reflects Chelsea’s surface need to exact revenge for the intentionally provoking counseling sessions and for the Society kiss.

The Young And The Restless Spoilers – How Far Will Adam Newman Go?

Any attack against Adam should consider how he’ll strike back. Vipers are like that, as Chelsea knows all too well.

So, armed with the knowledge that Chelsea has been hiding her recovery from him, Adam is geared to work the show. He’ll attempt to turn what was a disadvantage into something useful.

Whether Adam tries to demonstrate his commitment to Chelsea or teaches her a lesson will soon be known. As anticipated, the Chadam coupling is again repeating their dysfunctional pattern.