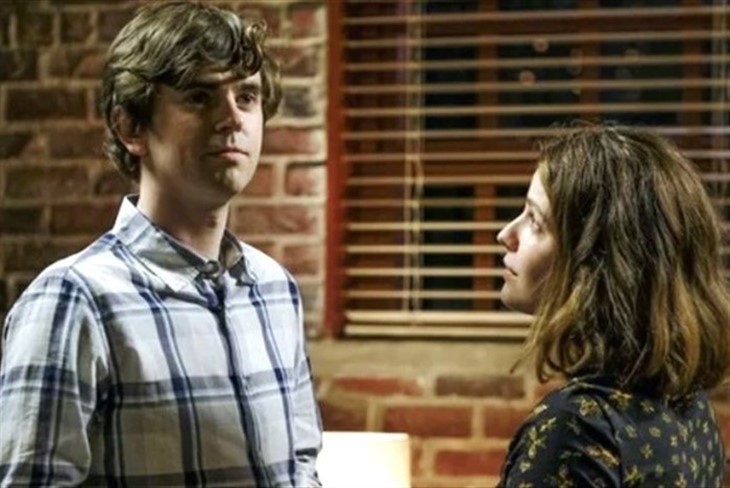 The Good Doctor spoilers tease that Shaun Murphy (Freddie Highmore) will reveal his feelings about his girlfriend Lea Dalillo’s (Paige Spara) pregnancy in this Monday, March 22nd’s episode of The Good Doctor.

Viewers will recall that Shaun was speechless when Lea told him they were expecting a baby. Shaun was a bit blindsided, as Lea was also, to find out their birth control method had apparently failed! This revelation was made after a comedy of errors concerning Lea’s car, which had been towed by a sleazy repo man/tow truck driver named Tricky (Jesse Stretch). She had parked her vintage car in someone else’s spot at St. Bonventure Hospital and Tricky towed it. Shaun had refused to lie for Lea about it being her parking spot, which Tricky probably knew anyway if the hospital hired him for such occasions.

Later, she skipped lunch to gather dirt on Tricky to try and leverage him for the release of her car. She was a bit more emotional than she usually had been, which should have been a clue to Shaun, but then he’s not an obstetrician, he’s a surgeon so we can give him a pass. Lea castigated Shaun a bit, telling him they are a team and he should have her back! She said they had a common goal, of getting her car back! Shaun eventually gave in and handed his phone to Lea so she could create a whole bunch of phony Yelp accounts and enter enough bad reviews to drive Tricky’s Towing out of business.

Finally, the couple went over to the tow lot in person to confront Tricky, where Shaun was prepared to pay whatever he wanted to get Lea’s car out of “jail”! But instead, Shaun got sneaky while Lea talked to Tricky, swiping her car keys out of his office and giving them to Lea, and the two quickly escaped, with Shaun chasing the car and getting in as an exasperated Tricky followed. However, later when they got home Shaun confessed he’d left $250 on a desk in Tricky’s office. Shaun mentioned to Lea that she had been a bit crazy recently and then she admitted it was hormones, and that she was pregnant! Shaun looked shocked!

In Monday’s The Good Doctor episode, Shaun tells Lea that he is excited about the baby and wants to do everything he can to make sure that the pregnancy is problem-free. He tells Lea that he is going to try to be extra responsible going forward, and takes Lea’s blood pressure. He tells her he loves her, and he wants to have a baby with her, and he loves the baby and wants the baby. Lea wants children too, but she isn’t sure that it is the right time to have a child.

She wants Shaun to think about it before they make any decisions about continuing the pregnancy. Shaun seems to think it’s a no-brainer, but he is caught up in the idea of a new baby, and may even be thinking about naming it after his brother if it’s a boy; Lea is more pragmatic, thinking of consequences and if they are really ready to be parents. Lea thinks they should probably talk to some older and wiser friends, possibly some who are parents (other than her own) to see what all they might be getting into; after all, a baby is a lifetime commitment! It isn’t something to be entered into without some thought!