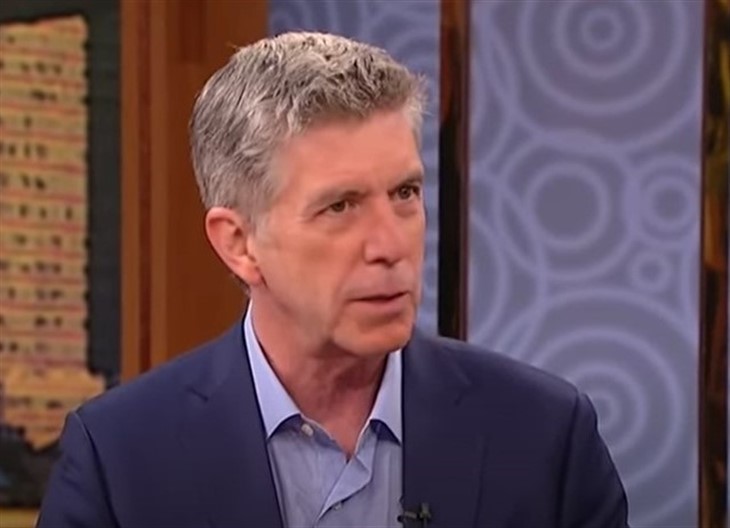 The hills are alive with the sound (er, make that sight) of former Dancing With the Stars (DWTS) hosts Tom Bergeron and Erin Andrews reuniting for cocktails. Less than a year after the DWTS duo got fired, the two met up for some alcohol-infused beverages.

Result: It must have been a slow day in media land, because every entertainment outlet in the world covered their cocktail confab. Showing his famous sense of humor, Bergeron turned to Twitter to make fun of the spotlight, and Andrews offered her own humorous insights on the attention. Read on to see exactly what happened, how the media world over-reacted, and how Tom mocked the situation.

“Reunited & it feels so good 😉 with @erinandrews,” wrote Bergeron on the Instagram photo.

And in a sort of “birds of a dancing show host stick together” demonstration of support, Cat Deeley (famed in her own right for hosting So You Think You Can Dance) wrote wishfully, “If only I could have sat at the next table… it would have been like old times.”

Erin shared the photo of the reunion on her own Instagram. And as Tom pointed out on Twitter, the media went wild over the get-together.

“I haven’t seen this much coverage of a lunch since Obama’s “Beer Summit,” joked Bergeron on Twitter, linking to one of the many media reports of the cocktail get-together.

DWTS – Is Erin Andrews Hinting At A New TV Show with Tom Bergeron?

In her repost of Tom’s cocktail photo, Erin dropped a hint or two on Instagram about future TV shows.

“Always something in the works,” wrote Bergeron’s former DWTS co-host.

Hmmmm. Could it be that in the wake of their firing, Tom and Erin are planning a new show?

Since leaving Dancing With the Stars, Andrews has stayed busy co-hosting a podcast. Called “Calm Down,” the podcast features what Erin describes as “unfiltered real conversations.”

In contrast, Bergeron has enjoyed an occasional cameo or special appearance. He also shared on Twitter that he is writing a novel.

But both Erin and Tom appear to have time for a second co-hosting act after ABC pushed them out the “you’re fired” door.

Bergeron has made it clear that he harbors no resentment against the network. When he learned that he would no longer be co-hosting DWTS, he tweeted that he viewed the experience as “an incredible 15-year run and the most unexpected gift of my career. I’m grateful for that and for the lifelong friendships made.”

And in his trademark witty style, Bergeron added, “That said, now what am I supposed to do with all of these glitter masks?” 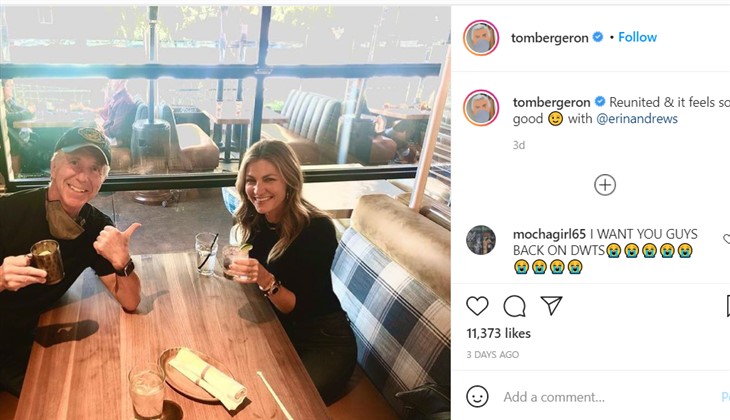 Even though it’s now been months since Tom and Erin were fired, the Twitter community responded enthusiastically to their reunion. Some even tweeted that they would boycott DWTS unless ABC re-hired the duo (DWTS is currently hosted by Tyra Banks).

“We love you, miss you, & want the OG’s back (you & Erin). I refuse to watch Tyra, hard pass,” tweeted one loyal fan after Bergeron tweeted the photo of their reunion. “They shot themselves in the foot with this. You & Erin are the sweetest, we miss you. That’s why, we care & are upset with how you both were treated.”

Dancing With The Stars News Update: What Derek Hough Had To Say About A Return To DWTShttps://t.co/MO8RlKxC3g

“DWTS was a fun show to watch even when it went through its two night to one night transformation. The reason in big part was you and Erin. Now, no Tom and Erin, no watch,” posted another.

However, when ABC shared a statement about the decision to fire Bergeron and Andrews, the network appeared to close the door on possible returns.

“Tom Bergeron will forever be part of the Dancing with the Stars family. As we embark on a new creative direction, he departs the show with our sincerest thanks and gratitude for his trademark wit and charm that helped make this show a success. Erin will also not be returning, and we appreciate all that she brought to the ballroom,” stated the network.