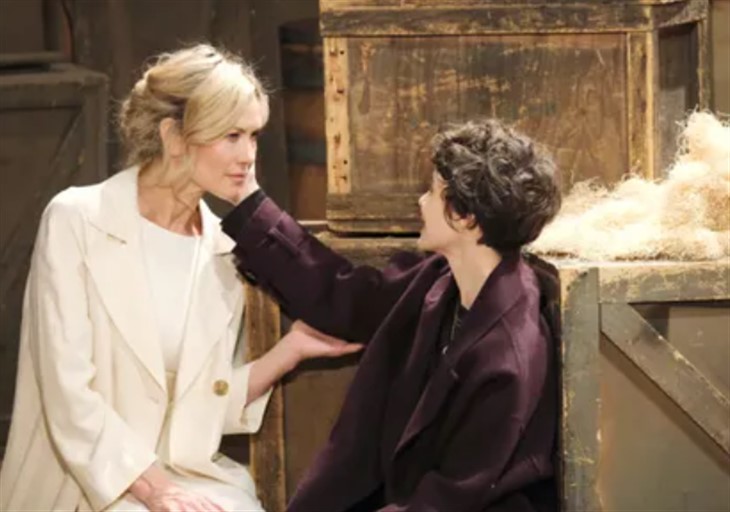 Days of Our Lives (DOOL) spoilers tease that Brady Black (Eric Martsolf) will be stunned by Kristen DiMera’s (Stacy Haiduk) confession in an upcoming episode of Days of Our Lives! Kristen has been doing a lot of things that she shouldn’t have, so Kristen might find herself doing a lot of confessing-and it may not even be Kristen!

Days of Our Lives viewers will recall that Kristen talked Susan Banks (Stacy Haiduk) into trading places with her for about a month, with Kristen impersonating Susan and Susan impersonating Kristen. So the Kristen that confesses to Brady may not be Kristen at all, but Susan! Brady will make a visit to Statesville Prison to see Kristen. The real Kristen told Susan that she wanted to do the swap so she could keep an eye on Brady – but then, she was discovered by Sarah Horton (Linsey Godfrey).

She then imprisoned Sarah in the DiMera wine cellar, and impersonated her – Kristen again went rather berserk when Sarah reminded her of the sad time when Kristen thought her baby was dead and it was really Sarah’s, and she decided to break up Sarah’s relationship with Xander Kiriakis (Paul Telfer)! She then switched gears – and disguises – and used a Sarah mask with a voice-changing mechanism, the same as she had when she impersonated Nicole Brady (Arianne Zucker)!

She arranged for “Sarah” to break up with Xander in an extremely cruel way, by pretending to reconcile with Rex Brady (Kyle Lowder) and Xander to find them in bed together. In the meanwhile, Sarah had found the syringe with a hallucinogenic substance in it that Abigail DiMera (Marci Miller) had tried to inject Gwen Rizchech (Emily O’Brien) with. It was the same substance Gwen had injected Abigail with and caused her to have to be treated in a mental health hospital in Florida for several months. Sarah and Kristen struggled over the syringe, with Sarah being injected and the last we saw of her, she was in a steamer trunk being transported to an island with Kristen as Sarah pushing it! This was after “Sarah” dumped Rex!

Given that the real Kristen had taken Sarah to an island – possibly Melaswen, which Stefano DiMera (Joseph Mascolo) owned, and is likely holding her captive – it may not really be Kristen who confesses to Brady! Kristen’s whole reason for wanting to be out of prison was to keep an eye on Brady, and keep Chloe Lane (Nadia Bjorlin) from seducing him! But all that may have been circumvented and Kristen may have to be away with Sarah on Melaswen! Kristen apparently didn’t want to kill Sarah, just get her out of the way for a while and the accidental injection surely accomplished that! Sarah was so out of it that she was hallucinating that Kristen herself was Xander!

She will have to put her somewhere where no one will find her and no one will believe her insane ramblings. Whether that is in a mental health facility or some of her father’s old minions dealing with Sarah on Melaswen, Kristen may not yet be swapped back with Susan! Kristen as Susan got to spend a lot of time with her baby daughter also, so Kristen will want to get back to Salem since Chloe is still a threat!

However, she may be delayed because of Sarah situation! It is doubtful that the real Kristen would confess any of her recent wrongdoing to Brady, so chances are she is still with Sarah and it is Susan who is confessing to him – and she will confess exactly that – she is not Kristen, she is Susan, and Kristen has been impersonating her on the outside! Then Brady will realize that “Susan” left town and left the real Susan in Statesville! Yes, Brady will be stunned!