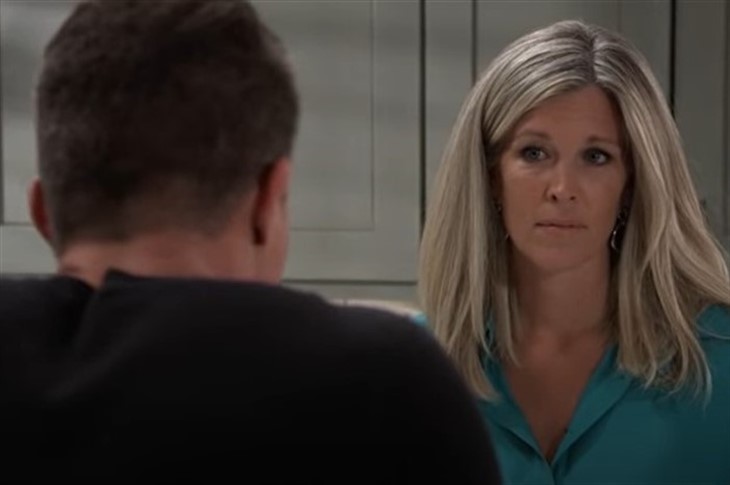 General Hospital (GH) spoilers tease that Carly Corinthos, (Laura Wright) will have a meeting with Cyrus Renault (Jeff Kober), treading in some very dangerous territory. She will bring a still jailed Jason Morgan (Steve Burton) up to speed on her meeting in an upcoming episode of General Hospital!

General Hospital viewers will remember that when Sonny Corinthos (Maurice Benard) disappeared and presumably died, Jason took over as the head of the Corinthos crime family. The funeral was all optics since nobody had been found and Jason wanted to show, a strong leadership to the five families. But then Franco Baldwin (Roger Howarth) was murdered, and Jason found him near death in his art studio.

Elizabeth Baldwin (Rebecca Herbst) arrived at Franco’s art studio at the same time and found Jason kneeling over Franco. There was a little life left in him, and Elizabeth tried to revive him, but he had simply lost too much blood and Jason and Elizabeth arrived too late to save him. Franco woke up just long enough to tell Elizabeth goodbye. Elizabeth immediately accused Jason of killing Franco, because of the request Franco had made to Jason to kill him if his returning brain tumor made him dangerous again.

Jason didn’t do it, but what no one knew yet is that there was an eye witness – an eye witness procured and likely paid by Cyrus! So, with Jason in jail, and Elizabeth not backing down from her accusations when Carly asked her to, Carly now must take the reins in Jason’s place! One enemy that she must confront is Cyrus, and she sets up a meeting with him!

Longtime General Hospital viewers will remember that Carly has gotten herself into some pretty tight situations and back out again in the past. Once she was locked in a panic room by Ric Lansing (Rick Hearst) when he and Elizabeth were married, and Carly was pregnant! Luckily for Carly, Elizabeth discovered the room and got curious and opened it, and Carly was rescued as a result. But there have been more dangerous situations and criminals Carly has dealt with than that!

Carly is pretty sure that this evidence against Jason, which consists of a gun he didn’t even own being thrown down a garbage chute, was manufactured and planted by Cyrus. She’s pretty sure the witness was paid by Cyrus too, although it will be someone Carly knows will do anything for money! Carly has no earthly clue that one of her Metro Court office renters, Peter August (Wes Ramsey) is the one who killed Franco, nor does she know that Cyrus and Peter have banded together. But she meets with Cyrus, and she represents herself as the acting head of the Corinthos crime family, and Cyrus finds out that Carly has some nerve!

She knows that whether Cyrus knows the identity of Franco’s killer or not, that he has an agenda against Jason, and she accuses Cyrus of a frame! Carly, who can be her own worst enemy at times, angers Cyrus but doesn’t get anything out of him. Brando Corbin, (Johnny Wactor) who has been acting as a double agent for Sonny and Jason against Cyrus, steps in and convinces Carly to leave! Privately, he contacts her and tells her what he knows – and she goes and tells Jason what she’s learned from Brando. Jason tells her not to try to go up against Cyrus again!