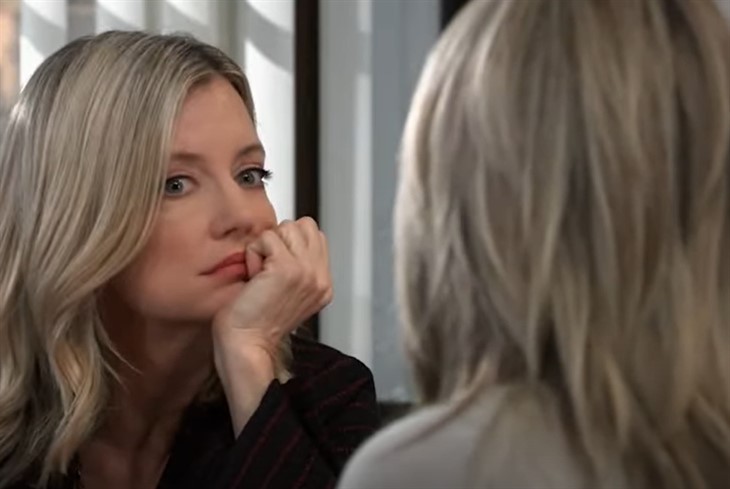 General Hospital’s Carly and Nina have been having issues lately over the grandson, Wiley Corinthos (Theo and Erik Olson). Of course, they have also clashed over Nina’s daughter Nelle Benson (Chloe Lanier) as well. Carly keeps trying to convince Nina that she did everything she could do to help Nelle before she fell. However, because Jax insisted that Carly keep quiet about witnessing Nelle’s fall.

However, Nina chose to tell Wiley that his adoptive mother, Willow Tait (Katelyn McMullen), was not his real mother. However, Willow is the only mother that Wiley has ever known. Nina’s actions upset both Willow and Wiley. Carly is only protecting her family but cutting Nina out of Wiley’s life is Michael Corinthos’ (Chad Duell) call. However, Nina still blames Carly for her daughter’s death.

General Hospital’s Nina has happened upon a not-so-dead Sonny at her friend, Phyllis Caulfied’s (Joyce Guy) bar. Sonny believes he recognizes Nina from his dreams, but she knows better. Nina knows that it is Carly that Sonny is dreaming of and calls her to tell her the good news. However, Carly and Nina clash with Wiley and she decides that maybe revenge is better. How hard would it be to let Sonny believe that she is the woman he is dreaming of and seduce him?

General Hospitals’ Jax has upset Nina more than words can say. Jax professes his love for Nina and then chooses to protect Carly instead of her. Jax wanted to keep the secret because he claims he did not want to Nina hurt. Nina had lost her daughter and Jax thought it was better if she never knew. Unfortunately, Jax did not consider the consequences of his actions.

Now, Sonny is at Nina’s mercy because of Jax and Carly’s actions. Sonny is vulnerable because he has no memory of his past. Sonny connects with the blonde woman but is dreaming of his wife, not Nina. Nina may get revenge but could face charges in the end.

Jax is trying his bed to find Nina and make things right. Will Jax find Nina before she has a chance to seduce Sonny? Will Nina face an even bigger wrath from Carly in the end?