The Bold And The Beautiful (B&B) Spoilers: Hope Reeling After Separation From Liam – Turns To Thomas? 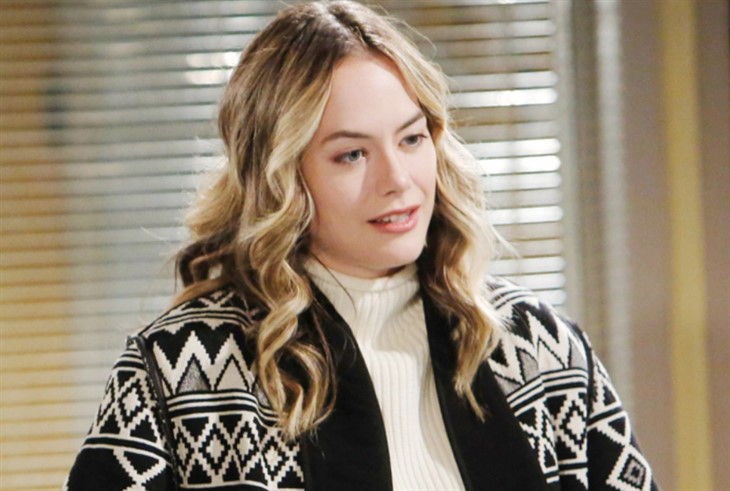 The Bold and the Beautiful (B&B) spoilers document that Hope Spencer (Annika Noelle) is known for her optimistic outlook. The Hope For The Future line at Forrester Creations reflects who she is, or possibly who she was.

The need to separate for Liam Spencer (Scott Clifton) wasn’t a snap decision. Instead, Hope allowed time to pass, waited for the paternity results to be known, let more calendar pages digitally turn, and then reached what she views as an impasse.

Hope’s call for a separation puts her life, Liam’s, and their children’s into flux. That generates uncertainty and with it some unexpected personality changes.

Liam is the first person to see the change that’s taking place. He knew that Hope hadn’t committed to remaining married and didn’t want to believe that she would make the choice she has.

Hardcore fans recall that Flo was convinced by Reese Buckingham (Wayne Brady) to portray a desperate mother who gave her baby up for adoption. The baby was Beth and an epic storyline followed.

The mannequin storyline cleverly set the stage for Liam’s undoing and Thomas’ redemption storyline. Hope was forced to deal with the consequences of Liam’s cavort with Steffy and was initially believed to be the father of her expectant child.

With Lope’s trust broken their union may be as well. Hope’s decision to separate from Liam feels like the start of a full split. But he will choose to believe that it isn’t that.

The Bold And The Beautiful Spoilers: Steffy Moving On – Liam’s Old News, Finn Is The Futurehttps://t.co/DFYTLTjEQl

The Bold And The Beautiful Spoilers – Hope Logan Or Another Name Added?

Hope became Liam’s wife in a civil ceremony this couple completed a mere matter of months ago. All seemed well at that time, with Beth and Douglas Forrester (Henry Samiri) securely in the cabin.

It is fully reasonable to believe that Liam’s terrible mistakes could result in Hope reverting to her Logan status. Then again, a relationship with Thomas is a realistic possibility.

Hope Logan Forrester wasn’t real in 2019 but represented Thomas’s manipulative efforts. But Hope could present that same name in 2021 after a believable romantic storyline unfolds.