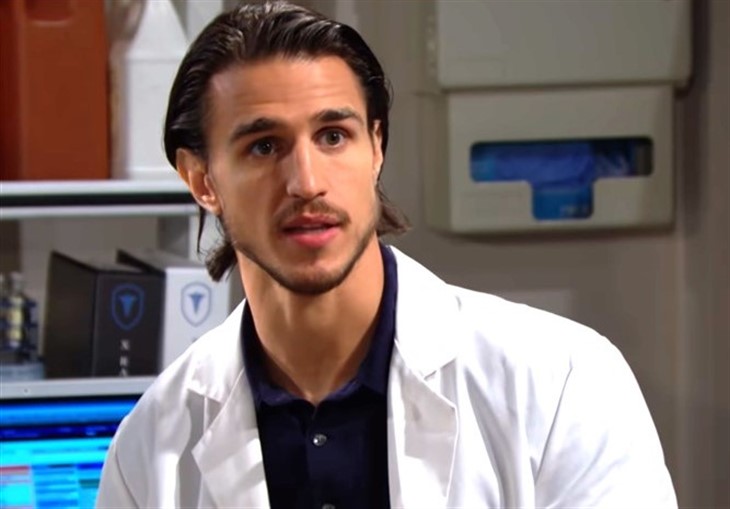 Viewers of The Bold and The Beautiful will recall that Vinny worked in the lab at the same hospital where Steffy Forrester’s (Jacqueline Macinnes Wood) paternity test was done. It is also the same hospital that Dr. John “Finn” Finnegan (Tanner Novlan) works who has now been proven to be the father of her baby. Vinny claimed to have altered the test as a favor to Thomas Forrester (Matthew Atkinson) to help him get Hope Logan Spencer (Annika Noelle) back, but it was a favor Thomas never asked for.

As a matter of fact, Thomas was the one, with Finn, that forced the truth out of Vinny. The last time viewers saw Vinny was when he was running out of the lab after the confrontation with Thomas and Finn! Steffy and Finn are getting their happily ever after, but as it has turned out, Liam would have lost him no matter how the paternity test came out because Hope has grown tired of his waffling between her and Steffy!

What drove the nail in the coffin of their relationship and marriage was Liam’s admission that he had told Steffy he still loved her the night they slept together after Liam couldn’t tell the difference between his wife and a mannequin, and he didn’t even have a brain aneurysm as Thomas did! Hope has realized that Liam was just being the king of excuses and she now has kicked him to the curb!

Bold and Beautiful fans have thought Vinny’s story sounded a little unbelievable all along. What would Vinny have gotten out of a reunited Thomas and Hope? Viewers know that Vinny’s “side hustle” as he called it was dealing drugs, some of which he even could have pilfered from the hospital pharmacy, if he’s been working there all along, including when he gave Steffy those pain pills! But where would Dollar Bill come in as a person of interest?

Yes, he has been very upset that Liam is upset and unhappy. He was livid in a recent episode of The Bold and The Beautiful, as he expressed in his office to his other son Wyatt Spencer (Darin Brooks) and Flo Fulton (Katrina Bowden). He didn’t like that Liam was losing his wife and family although he acknowledged Liam messed up by spending the night with Steffy and cheating on Hope. Bill should tread carefully however because Hope is Katie Logan’s (Heather Tom) niece and he’s trying to convince her to give him a second chance!

Bill, too has been a waffler by nature, going back and forth between two sisters so in a sense he’s even worse than Liam! Liam, however, is now lost. He doesn’t have a woman to turn to because Steffy is with Finn and Hope won’t take him back again. But let’s get back to Vinny. Liam was definitely blindsided when he found out the paternity test that showed he was the father had been altered by Vinny and he blamed Thomas. That didn’t fly, Thomas had exposed Vinny! Vinny’s story didn’t quite fly, what would he have gotten out of it? Maybe he got money out of it! Could someone have paid Vinny to alter the test?

The Bold And The Beautiful Spoilers: Quinn And Shauna Patch Up Friendship, Who Will They Target Next? #bb #BoldandBeautifulhttps://t.co/YNzCmWHtBZ

Long-time viewers of The Bold and The Beautiful will recall that Dollar Bill was in a similar situation as Liam was – and also with Steffy! There was a question of whether Liam was Kelly Spencer’s (Colette and Avalon Gray) father or Bill! Nothing has been said about how many years that Vinny has worked in that lab, but Kelly is only three years old, to turn four in June.

Liam seems to have been established as Kelly’s father but what if it was really Bill and he paid Vinny off back then, and maybe this time too, to keep him quiet? Money usually leaves paper trails, and if there was a payoff to show Liam was the father of the new baby and possibly a payoff regarding Kelly’s paternity, maybe that paper trail led back to Bill, and that’s why he becomes a person of interest in Vinny’s death!