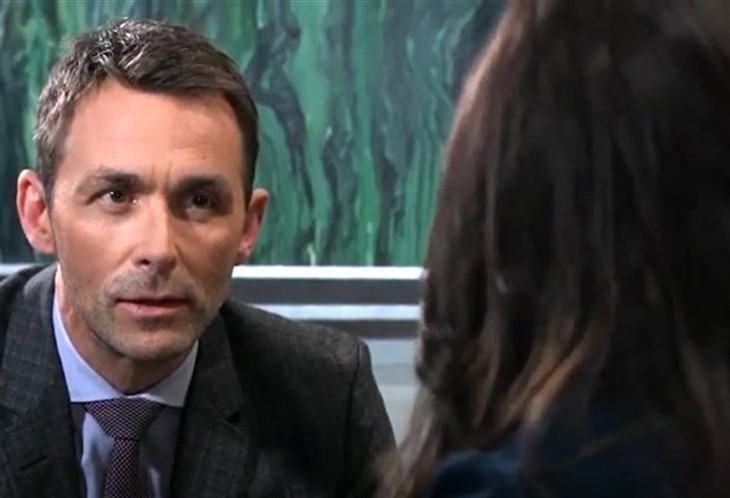 General Hospital (GH) spoilers tease that what started out as a casual, one-night encounter, may change the lives of a couple of Port Charles residents forever. In fact, it already has. When Brook Lynn Quartermaine (Amanda Setton) slept with Valentin Cassadine (James Patrick Stuart) a few months ago, they were just having a little bit of fun.

But even as she was leaving town, Brook Lynn suspected that she was pregnant. Upon her return to Port Charles, there was no doubt, as Brook Lynn was already noticeably showing. Brook Lynn’s time away gave her time to decide how she wanted to handle the situation.

General Hospital Spoilers – Brook Lynn Quartermaine Came Right Out And Told Valentin Cassadine That She Was Having His Baby!

Knowing that Valentin was a good father to Charlotte Cassadine (Scarlett Fernandez), Brook Lynn planned to use Valentin’s fatherly instincts against him, in the hopes of getting the ELQ shares back that he tricked her out off months before. Almost as soon as she returned to Port Charles, Brook Lynn ran into Valentin, and rather than trying to hide her condition, she came right out and let him know they were expecting. As expected, Valentin offered to help Brook Lynn in any way that she needed. So it seems as if the two of them will be spending quite a bit of time together in the near future.

But even the most well-thought-out plans can go awry, and Brook Lynn isn’t always the one to think things through. And certainly wouldn’t be expecting to fall in love with the former Cassadine. She may just surprise herself, and her family, by developing real feelings for the father of her baby. But what about Valentin? Currently, Valentin is still pining over Nina Reeves (Cynthia Watros). Nina has been struggling with the revelation that Nelle Benson (Chloe Lanier) was her long-lost daughter, and the fact Nelle died before they could have any type of relationship. Valentin’s initial hopes maybe that Nina will want to reconcile with him, especially if that means she can be the new baby’s step-mother.

Nina recently left Port Charles, needing to get away from all the drama. And now that she has discovered that Sonny Corinthos (Maurice Bernard) is actually alive, but has amnesia. It’s unclear how that situation will resolve itself right now, but there is a distinct possibility that the situation with Sonny will keep Nina out of Valentin’s orbit for the time being. And with Brook Lynn carrying his baby, he might also find himself drawn to Brook Lynn. Neither Valentin nor Brook Lynn was looking for anything other than casual fun, but they may surprise everyone, including themselves by falling in love.

Will Brook Lynn go through with her plan to get ELQ back for her family? Or will she find that she genuinely is falling in love with Valentin? Will Nina’s absence lead a lonely Valentin to the mother of his baby? Is this a couple that is worth watching? Love happens in the strangest ways in Port Charles, so stay tuned to General Hospital airing weekdays on ABC. And don’t forget to check back right here regularly for all your General Hospital news, information and spoilers!