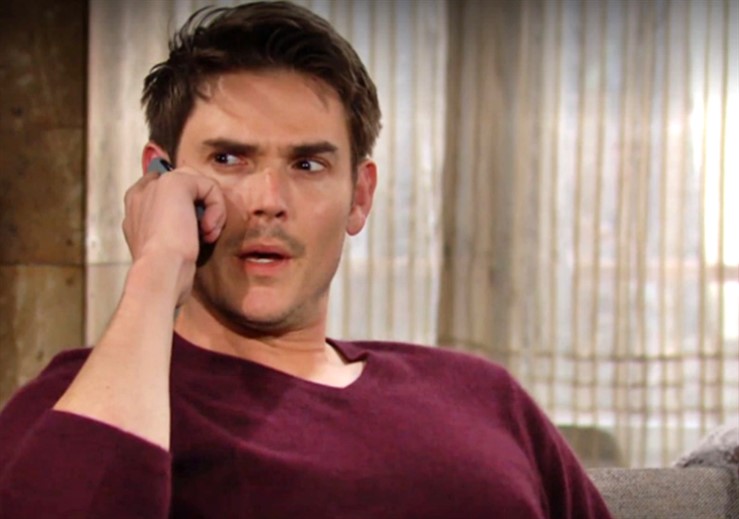 The Young and the Restless (Y&R) spoilers document that in Genoa City, Wisconsin Adam Newman (Mark Grossman) will find himself increasingly entangled in Chelsea Lawson’s (Melissa Claire Egan) revenge game. She’s pitting him and Sharon Rosales (Sharon Case) against each other as part of an attempt to break from Chadam forever.

Chloe Mitchell’s (Elizabeth Hendrickson) involvement in Chelsea’s cloaked plan is leaving room for interpretation. It appears as though Adam’s arch-nemesis is responsible for the series of faked texts that were presented as coming from his phone. Whether Chelsea has also orchestrated Rey Rosales’ (Jordi Vilasuso) poisoning is yet to be known.

Chelsea is a con artist at heart. While she’s become a good mother, Victor Newman (Eric Braeden) recently stated that he didn’t trust Chelsea. That was intended as a direct message to his son to remain on guard.

The Young And The Restless (Y&R) Spoilers: Adam Furious, Accuses Chloe Of Setting Him Up

Adam didn’t know it at the time, but his father was right to be suspicious. Victor will eventually be proven right and that will play into the reconciliation storyline between the Newman’s.

Chelsea was understandably incensed that Adam would purposely choose Sharon to provide what he termed counseling sessions. Egan’s character believed he flaunting a continued interest in Sharon, with the side potential of provoking Chelsea’s quicker recovery so that he could leave her for Case’s character. The Society kiss photo played into her theory.

Adam was not trying to rub a revived relationship under The Young and The Restless Chelsea’s nose because Shadam didn’t and doesn’t exist. But it could and Chelsea remains rightly outraged in that regard. As for Sharon, she decided to believe that her skills would further the healing process.

Chelsea’s state of mind has been greatly altered by the stroke and what she thinks she’s endured thereafter. She wants to box Adam out and directly targets Sharon, who is seen as playing dirty during a period of serious vulnerability.

The Young And The Restless Rumors: Phyllis Fights Dirty For Summer?https://t.co/S0EOgIZt4v

The Young And The Restless Spoilers – Adam Newman’s Troubles Mount

Adam has finally achieved a sense of normalcy with Victor and was about to head Cyaxares. Whether that business deal remains in place or Adam is able to run the show will soon be known.

Meanwhile, Chelsea is stirring major trouble between Adam and Sharon. The intended or unintended consequence will have Sharon pointing to Adam as the person who tried to poison Rey using Thallium. So, trouble with the law lies directly ahead.