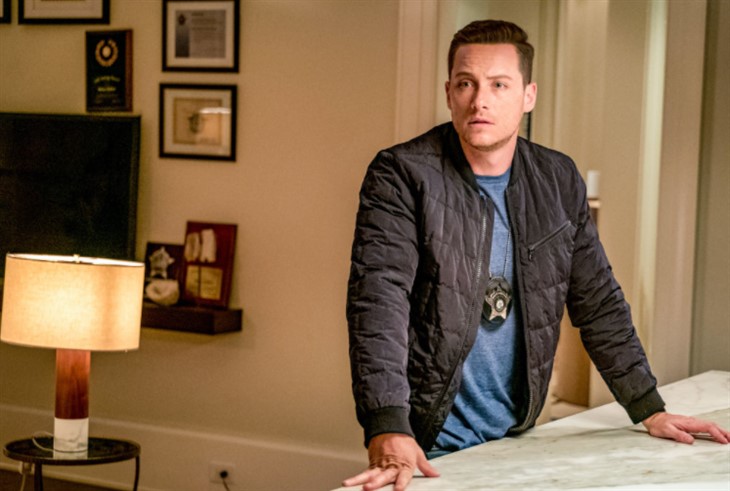 Chicago PD spoilers tease that according to Jesse Lee Soffer, Chicago PD’s Jay Halstead, there will be more “Upstead” romance ahead. “Upstead” of course is the combined names of Upton and Halstead, meaning Detective Hailey Upton, played by Tracy Spiridakos.

Longtime Chicago PD viewers will recall that Jay and Hailey were partnered in the first episode of season five, following the departure of Jay’s ex-girlfriend and former partner, Erin Lindsay’s (Sophia Bush) from Chicago. They conducted themselves professionally and their partnership was functional, although a bit rocky at first due to Halstead’s heartbreak over the loss of Erin. However, they became good friends, gradually, as time went on, as well as confidants.

Always, they have had each other’s backs. Even when they first became partners Hailey insisted to let her know if there was anything Jay needed. This was a solid foundation for eventual romance. In an episode from season five called “Fallen”, Jay reciprocated by telling Hailey to let him know if she needed anything after the death of a previous colleague of hers which hit her hard.

In season six, their relationship deepened despite Jay’s acting out when his father died. Hailey broke down in tears, thinking Jay was dead upon finding him with a bullet in him. He recovered, however and in a season six episode called “True or False” a suspect she was interrogating committed suicide in front of her, and Jay did the heavy emotional lifting for her.

By Chicago PD season seven, when Jay again was shot in episode ten, “Mercy” Hailey realized her feelings for him and the extent of them since it wasn’t sure that he would survive. It is revealed how well the two know each other as during his time in Chicago Med – where his brother, Will Halstead (Nick Gehlfuss) works as a doctor – Hailey mentions Jay’s fear of needles and hospitals in general. When he wakes up, he wants Hailey to take him out of Med, Will or no Will, and she comes close to telling Jay her true feelings but then they were interrupted by a phone call.

At that point, she realized Jay was not in the right state of mind for that kind of news! Jay worries he’ll never see her again when Sergeant Hank Voight (Jason Beghe) sends Hailey to the FBI in New York, punishing her for crossing lines. Jay admits to Sergeant Trudy Platt (Amy Morton) he misses Hailey. After Hailey returned, she received an offer for a permanent job with the FBI but struggles with whether to accept it. This led them to admit their feelings for one another and they started becoming intimate, with Jay helping Hailey with her feelings about her abusive father after she receives word he had a heart attack.

During NBC’s midseason press event, Soffer revealed showrunners’ plans for more romance for the pair and noted that considering Chicago PD has such a large ensemble cast it would be impossible to feature “Upstead’s” romance in every single episode. He told reporters that just because a certain dynamic doesn’t play out in one episode, it is because of their having so much storyline to cover, and storylines often play out over several episodes, and sometimes over a season. Right now, “Upstead” is going strong, but Voight won’t be warmed up to inter-office romances – paralleling a storyline going on in Chicago Med with two doctors being confronted about their romance.

Jon-Michael Ecker: Who Is The Chicago Fire Actor?https://t.co/LxcP8n0fNL

Voight’s portrayer, Jason Beghe, then commented that he thinks Hank has adopted a “don’t ask, don’t tell” attitude about inter-office romances. As far as a romance for Hank, Beghe says fans shouldn’t get their hopes up for anything happening between Hank and Deputy Superintendent Samantha Miller (Nicole Ari Parker). It’s just not that kind of relationship, although he admitted there could be potential if the writers decided to go there. Beghe said if there was any romance ahead for Miller and Voight, it would certainly be a non-traditional one!

Fans can look forward to more of a codependent connection between those two, although there will be trust built up. But “Upstead” is definitely going to see more action!

Stay tuned to Chicago PD, and keep checking Chicago PD spoilers frequently for all the latest news, updates, and developments!