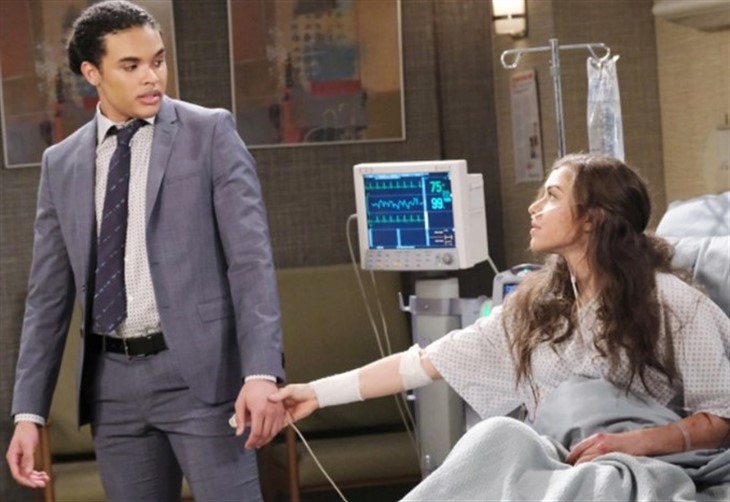 Days of Our Lives (DOOL) spoilers suggest that Ciara Weston (Victoria Konefal) is not getting her memory back any time soon. Furthermore, now that Theo Carver (Cameron Johnson) is home, Ciara wants a second chance with him. However, it looks like she might have some competition from Chanel Dupree (Precious Way). Could Theo and Chanel have a past the Ciara is not aware of?

Days Of Our Lives Spoilers – Rumors Suggest A Connection To Chanel

Days of Our Lives rumors suggest that Chanel could be the girlfriend that Theo had in South America. Theo says he and his girlfriend broke up right before he came home but he did not give any details on the breakup of the relationship. Suppose for a moment that Chanel and Theo were dating online instead of in person. Chanel may not even know that Theo is in Salem since she just arrived. However, this could change if she bumps into him. Will Chanel stake her claim on her man?

Days Of Our Lives (DOOL) Spoilers: Charlie’s Killer Linked To John And Marlena

Days of Our Lives Ciara and Theo once cared deeply for each other. However, Ciara did not want to be with Theo when he wanted her, and they went their separate ways. Later, Ciara wanted a chance with Theo, but he had moved on. Now that Theo is back, Ciara wants to be with him again.

Ciara seems to be forgetting one major issue at the moment. Ciara is a married woman. Would Theo consider dating Ciara even though she is married to Ben Weston (Robert Scott Wilson)? If Theo knew the extent of Ben and Ciara’s love, he probably would not set himself up for a fall. However, the heart knows what it wants, and he could decide to give Ciara another chance. Can Theo handle the heartbreak if Ciara goes back to Ben?

Days Of Our Lives Spoilers – Ciara Brady Versus Chanel

Obviously, Days of Our Lives Ciara has known Theo much longer than Chanel. This does not mean that Ciara knows Theo better. Theo is older and wiser than he was when he wanted to be with Ciara before. There is also the chance that Ciara’s memory could come back at any time. Chanel, on the other hand, has proven herself to be a spoiled brat who only cares about herself. Would Theo be better off with either of them?

Perhaps Theo and Claire Brady (Isabel Durant) might be the better choice. After all, the only baggage Claire has is a stint in Bayview.