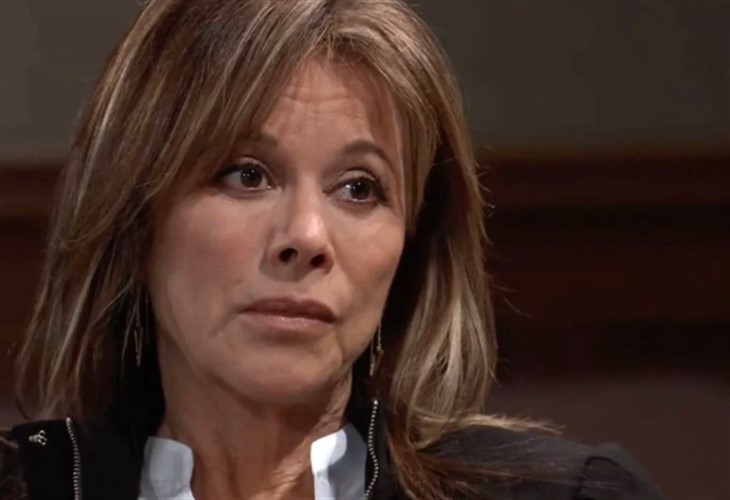 General Hospital (GH) spoilers tease that Alexis Davis (Nancy Lee Grahn) has been in a downward spiral for months now. She started drinking once again in order to deal with a serious loss that even now she hasn’t really come to terms with. Alexis had remained sober for quite a while before her world fell apart and she could no longer resist the lure of another drink.

In fact, Alexis was the happiest she had been in a very long time when everything changed. As viewers know, Alexis and Dr. Neil Byrne (Joe Flanigan) had finally decided that they wanted to be together even though they had both lost their license to work in their respective careers because of their relationship.

Neil was Alexis’ therapist who helped her understand why she always seemed to choose men who were bad for her. And then Neil also stepped in when Kristina Davis-Corinthos (Lexi Ainsworth) had become indoctrinated into the Dawn of Day cult. After successfully helping Kristina leave the cult, Alexis also severed her professional relationship with Neil because they had become attracted to each other, and it was of course unethical for a therapist to date one of their clients. They began to see each other, but either Neil didn’t know or he neglected to tell Alexis that according to the board of Ethics, a therapist had to wait two years before he could date a former client. It wasn’t long before Neil was brought up on charges for violating this rule.

GH Spoilers – Alexis Davis Lied That She And Neil Byrne Were Not Seeing Each Other Romantically.

Alexis insisted on testifying at Neil’s hearing. Not wanting him to lose his ability to work as a therapist, Alexis lied that there was nothing between them even though they had finally slept together the previous night. Sadly, the Ethics board found out about their lie and both Neil and Alexis were barred in their respective fields.

Despite all of that, Neil showed up one night and they admitted that they still wanted to be together despite everything they had lost. They slept together and began to plan their next steps together. But a shocked Alexis discovered Neil had died right after they had sex. Even more shocking was that Neil died of an overdose and had apparently shot upright in Alexis’ bed!

Neil drug use was a shock to everyone. It seemed for a while as if someone might have murdered him. But that would mean that someone would have had to break into Alexis’ home while she was there. Alexis didn’t hear any signs of a struggle when she was downstairs making coffee so it seems highly doubtful that anyone other than Neil was there at the time.

If Alexis wants to get sober and remain that way, she’s going to have to face Neil’s death. He was a complicated man, for certain but his death wasn’t Alexis’ fault. Whatever happened to Neil that night may never be completely clear, but in order to move on, Alexis needs to close that chapter, even without all the answers.

Did Neil shoot himself up that night or did someone kill him? Can Alexis deal with the fact that she may never know the truth? And can she finally close the book on what happened to Neil and get herself sober once again? Sometimes the truth remains hidden in Port Charles, so stay tuned to General Hospital airs weekdays on ABC. And don’t forget to check back right here regularly for all your General Hospital news, information, and spoilers!