The Bold And The Beautiful Spoilers: Most Likely Suspects In B&B Death – Finn, Liam, Thomas, And Bill Under Suspicion 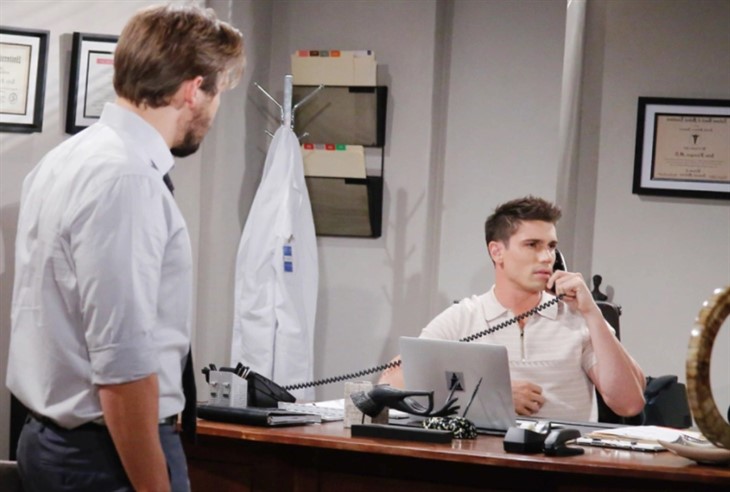 The Bold and the Beautiful (B&B) spoilers tease that a character will be killed off on an episode that currently projects as airing on April 5. It’s natural for fans to wonder if that B&B personality will be a regular or recurring character and who will be the killer?

John Finnegan (Tanner Novlan) has a scant backstory. So he’ll be under suspicion purely based on that point. However, he, Liam Spencer (Scott Clifton), Thomas Forrester (Matthew Atkinson), and Bill Spencer (Don Diamont) are all linked to a recent event that could become central to this head-turning storyline.

The Bold And The Beautiful Spoilers – Vincent Walker An Easy Out

Vincent Walker (Joe LoCiero) was last seen running out of the hospital laboratory. He was involved in a physical confrontation with Thomas and Finn. That alone is an easy tease to the upcoming murder.

Fans saw Ridge Forrester (Thorsten Kaye) receive a phone call where he learned that Vinny had been arrested because he changed the paternity test results. Assuming that he is being held in jail, LoCicero’s character could be killed while in custody.

However, a no-bail mentality could be in play, with Vinny being set free. So, he could be murdered on the streets of Los Angeles, California, or kill another character due to this frantic state. In either instance, this recurring character could be quickly eliminated as he’s not the main player.

Finn was most enraged by Vinny’s illegal actions. Novlan’s character was denied knowledge that he was the father of Steffy Forrester’s (Jacqueline MacInnes Wood) baby for a significant period of time. If Thomas hadn’t put two and two together Vinny’s role might never have come to light.

Liam didn’t want to be the father and is glad that Finn has been rightly identified in that regard. But Hope Spencer’s (Annika Noelle) decision to separate has increased, rather than lessened pressure in his life.

If Vinny is killed off, then a fellow inmate will likely be the perpetrator. But if he’s out on bail or escapes jail, then it becomes possible for Finn, Thomas, or Liam to act in self-defense against him.

Vinny sold drugs. He obtained them through some unknown source or sources for awhile. Thomas was the only known character who knew about Vinny’s falsely labeled side hustle. That alone could establish the childhood friends as mortal combatants. Finn could also be entangled in what would be a deadly replay of the lab fight.

Bill’s link to all of this is Liam. Diamont’s character is a fierce defender of his family. While he’s on the periphery right now, a plausible scenario could be created that links Bill to a murderous situation that involves Liam and Vinny.