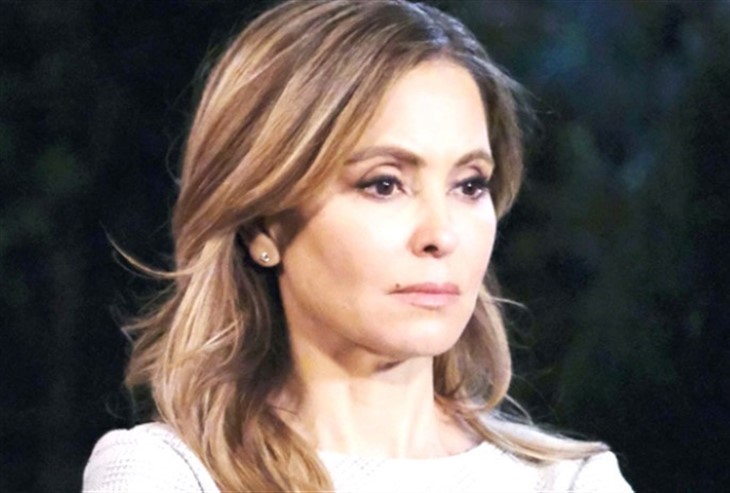 General Hospital (GH) spoilers tease that Olivia Falconeri (Lisa LoCicero) hasn’t reconciled with Ned Quartermaine (Wally Kurth) yet, but will she ever? Ned’s one-night stand with Alexis Davis (Nancy Lee Grahn) shook Olivia’s faith in her husband, and as much as Ned wants Olivia back, she just might not be able to get past his infidelity. Especially since Robert Scorpio (Tristan Rogers) is in the picture!

Not all that long ago, Olivia and Robert Scorpio went to Geneva, Switzerland where Olivia’s son was undergoing treatment for PTSD. While Olivia didn’t get to see Dante Falconeri (Dominic Zomprogna), the duo made a side trip to Monte Carlo when Robert received a call for help from the supposedly dead Holly Sutton (Emma Samms). Olivia accompanied Robert to a casino where the call supposedly came from. Part of their plan included Olivia pretending to be a high roller to distract the casino owners while Robert investigated. Robert ended up getting caught so Oliva rescued the former spy! It was obviously exhilarating for Olivia, but nothing romantic happened because she was happy to Ned at the time!!

While Olivia was away, there was a period of time that she couldn’t reach her husband, Ned Quartermaine. Incorrectly believing that Olivia was having an affair with Robert, Ned proceeded to get drunk. That’s when he ran into an equally inebriated Alexis, which led to them sleeping together.

Ned felt guilty almost immediately, but still decided to keep his indiscretion a secret from Olivia when she returned to Port Charles after her trip with Robert. Cheating was bad enough, but he lied about it for months so when Olivia eventually discovered the truth, the fact that Ned hid the truth made the situation that much worse. Ned moved out and Olivia still hasn’t decided what to do.

Olivia is giving herself time to figure out exactly what she wants to do. On one hand, no matter what he may have done, Olivia still loves Ned. But she may decide she can no longer trust him after the cheating and the lies. And it’s possible her adventure with Robert may have opened Olivia’s eyes to other possibilities. She may decide that she wants more than just being Mrs. Ned Quartermaine. It’s a big decision, but Olivia will likely choose to remain with Ned when all is said and done.

General Hospital (GH) Spoilers: Lucas Looking For A Love Connection – Who Will He Move On With? https://t.co/6EmShU450U pic.twitter.com/cdt9v66bKD

Should Olivia forgive Ned and take him back? Can she trust that her husband won’t cheat once again? Or could she want to see what else life has to offer, possibly with Robert? Difficult choices in the name of love and happiness are the norm in Port Charles, so stay tuned to General Hospital, airing weekdays on ABC. And don’t forget to check back regularly for all your General Hospital news, information, and spoilers!