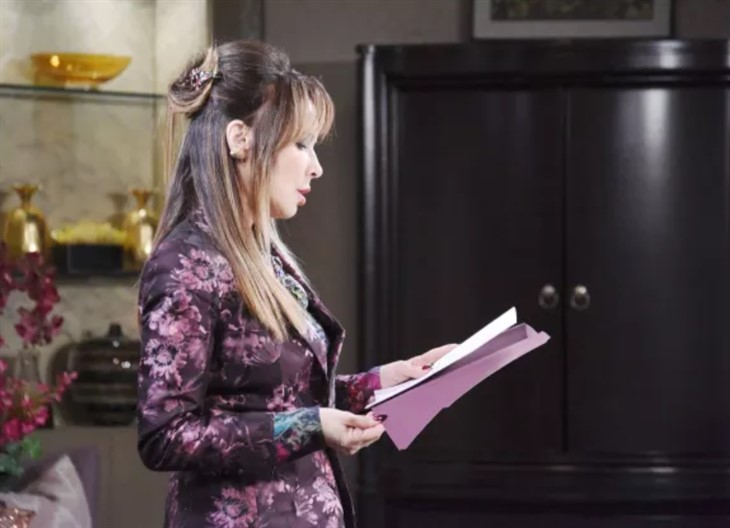 Days of Our Lives (DOOL) spoilers reveal that Kate Roberts DiMera (Lauren Koslow) might lose more than Jake DiMera (Brandon Barash). Kristen DiMera (Stacy Haiduk) has to make Kate disappear from Jake’s life to keep her prison switch scheme from being discovered. However, Kate connects the dots. Kristen will once again resort to drastic measures to protect her secret.

DOOL spoilers reveal that Kristen and Vivian Alamain (Linda Dano) made a deal. Vivian will make sure Susan Banks (also played by Haiduk) doesn’t blow the prison switch scheme. The plan is at risk of being found out when Brady Black (Eric Martsolf) makes a surprise visit to the prison. When Kristen finds out Brady went to the prison to see her, she begs Vivian to take action. However, Kristen hasn’t done anything about Jake and Kate. Vivian makes it clear that she wants Kate out of Jake’s life or Kristen can kiss her freedom, as well as Brady, goodbye.

Days Of Our Lives Spoilers – Connecting The Dots

In the new issue of Soap Opera Digest, it is confirmed that one spring storyline is Kate connecting the dots. She figures out that Susan isn’t herself… literally! When she realizes that Susan is really Kristen, it could blow apart the entire plan. Kristen will be forced to take drastic action. Kate could end up losing far more than Jake. She ends up with a huge target on her back.

Days of Our Lives spoilers reveal that Kristen is slithering around Salem spying on anyone who might be a threat. It’s not just about getting rid of Chloe Lane (Nadia Bjorlin) anymore. Sarah Horton (Linsey Godfrey) was literally shipped off after she found out the truth. Sending Rex Brady (Kyle Lowder) away was next. Xander Kiriakis (Paul Telfer) is too busy drawing his sorrows to add anything together, so he’s not a threat right now.

Plus, we know that “Susan” finds out about Lucas Horton (Bryan Datillo) and Sami Brady’s (Alison Sweeney) secret. This isn’t about Charlie Dale (Mike Manning) or Allie Horton (Lindsay Arnold). It’s likely that Lucas and Sami have a hot, steamy affair right before EJ DiMera (formerly James Scott) comes back to Salem! So, “Susan” will keep Lucas and Sami’s secret, but they have to break up Jake and Kate. When Kate connects the dots and figures out the prison switch, she could lose more than her relationship. She could end up losing her life.

Kristen is becoming more desperate each week. This began as a desperate scheme to keep Brady and Chloe from having an affair. Then, it became focused on Sarah going missing on her wedding day. In the next few weeks, we will have Kristen blackmailing Lucas and Sami before finding out that Kate is onto her.

She will want to pull the kill switch but what exactly does that mean? Will Kristen realize that every week there will be another person who could expose her secret? She will feel forced to eliminate the threats and the only way to silence Kate will be to kill her. Will someone else realizes the prison switch scheme or could Salem be embarking on its next serial killer storyline? Kate isn’t the first to threaten Kristen’s exposure and she won’t be the last, so everyone in Salem is at risk.

Be sure to catch up on everything happening with DOOL right now. Come back often for Days of Our Live spoilers, news, and updates.