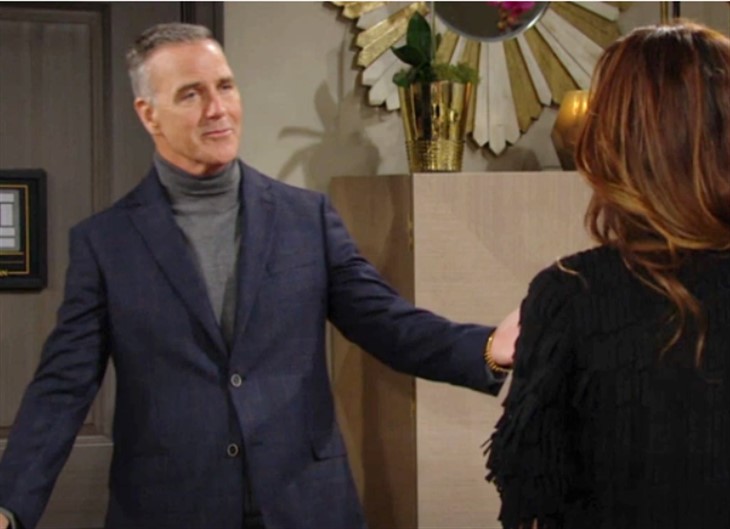 The Young and the Restless (Y&R) spoilers document that Ashland Locke (Richard Burgi) made a deal with the Newman’s. He agreed to sell his media company, Cyaxares but is faced with a new dilemma.

Adam Newman (Mark Grossman) is being accused of poisoning Rey Rosales (Jordi Vilasuso). He, along with Victor Newman (Eric Braeden) won the bidding process earlier this month. So, it appeared as though Chance Com and Newman Enterprises, as led by Victoria Newman (Amelia Heinle), we’re out of luck. Now, both entities seem to be back in the running.

The Young And The Restless Spoilers – Personal Considerations Do Matter

Ashland liked Adam’s pitch and the fact that Victor was fronting the money for the purchase. Burgi’s character seemed to feel that Chance Com was too green. However, Victoria’s offer was a different consideration.

Heinle’s character told Ashland that she would love to have dinner with him and his wife. He seemed to want a one-on-one affair, with the wink intended and recognized.

Whether Ashland fully follows through and picks a different winner after the race was won will be seen. But Victoria would seem to have a difficult, but not impossible, the path to victory circle. Billy Abbott (Jason Thompson) is, as always, a wild card that Lily Winters (Christel Khalil) knows.

The idea that Adam would poison Rey is hardly preposterous, considering all the many amoral and illegal acts that have occurred through the years. Most recently, Adam had Chelsea Lawson (Melissa Claire Egan) abducted, which Rey didn’t know when he was searching the penthouse and found what he believed was evidence of the poisoning.

Ashland was seeking the right fit for his company, having built its reputation to worldwide heights. To allow a man who is accused of attempted murder to become the new face of Cyaxares wouldn’t be palatable unless Adam is quickly cleared.

The Young And The Restless Spoilers: Nikki Newman Forced To Make A Confession #yr #youngandrestlesshttps://t.co/DBBbEzZdcS

The Young And The Restless Spoilers – Billy Abbott Loves The Smear

Adam took Delia Abbott (Sophie Pollono) from him, at least that’s how Billy sees it. So, Thompson’s character had no trepidation in smearing Adam using Chance Com’s power in the recent past. Why not do so again?

Billy would pile on Adam even if the possibility of stealing a business deal from him didn’t exist. But because that option may also be in play, Billy’s vigor will be seen. But Victoria still can’t be ruled out as the ultimate winner no matter what Adam, Victor, Billy, or Lily do.