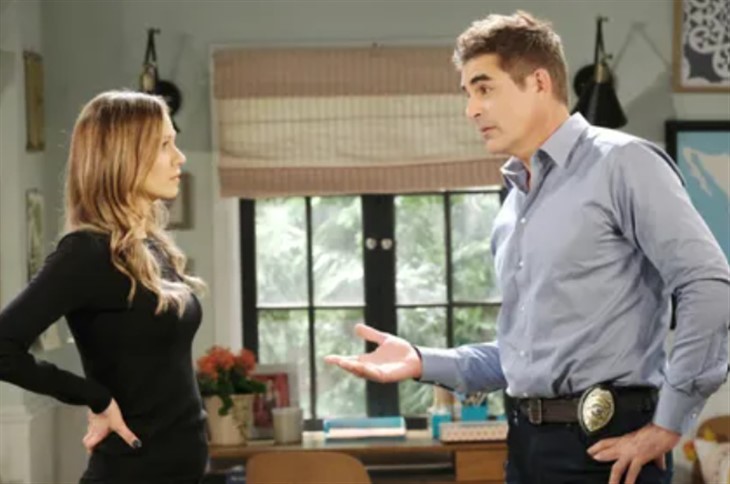 Days of Our Lives (DOOL) spoilers suggest that Ava Vitali (Tamara Braun) will open up to Nicole Walker (Arianne Zucker). Nicole believes that Ava may have killed Charlie Dale (Mike Manning) herself and wants Ava to admit to it. Ava will share some important information with Nicole, but will she confess to murder?

Days of Our Lives Sami Brady (Alison Sweeney) has been the number one suspect in Charlie’s murder since Rafe Hernandez (Galen Gering) found her in Charlie’s apartment. Sami thought she was protecting her daughter, Allie Horton (Lindsay Arnold), and shot Charlie a second time. However, Allie has convinced Lucas Horton (Bryan Dattilo) that she did not kill Charlie. Sami has now recanted her statement and Rafe is back to the drawing board. Does Ava know who killed her son?

DOOL Spoilers – Ava Vitali Decided To Sneak Out That Night

Days of Our Lives Ava was seen sneaking out of Rafe’s house the night Charlie was killed. However, Ava would not be on anyone’s radar if she had not told Nicole that maybe she should take Charlie out herself. Nicole is the only person who heard Ava’s words and now that Allie has been cleared, Nicole has to ask. Did Ava kill her son? Ava had no real connection with Charlie from the time he was born. Ava used Charlie to follow Tripp Dalton (Lucas Adams) so she could learn about him. However, Ava was never a mother to Charlie, but could she kill her own flesh and blood?

Days Of Our Lives Spoilers – Ava Vitali Could Have Another Theory

Days of Our Lives Ava may have killed Charlie. However, Ava may know of another suspect as well. Could Ava confess that Charlie’s murder could be connected to the mob? Could Ava have seen someone else exiting Charlie’s house and kept quiet about it? Spoilers suggest that Charlie’s murderer could be connected to John Black’s (Drake Hogestyn) family. Perhaps Ava saw John exiting the apartment and went in to find Charlie dead? Could Ava be assuming wrong because John is not the murderer? Perhaps Ava saw Claire Brady (Isabel Durant) or one of her parents at Charlie’s apartment.

Days of Our Lives Nicole is not known for keeping secrets when they involve someone else. Will Nicole run to Rafe with whatever information Ava reveals? If Ava implicates herself, can Nicole keep that quiet as well? Will Nicole help Rafe so this murder mystery or open the line of suspects up to include more people than ever?