Days Of Our Lives (DOOL) Spoilers: Fast Moving Chanel Wants Theo To Move In With Her 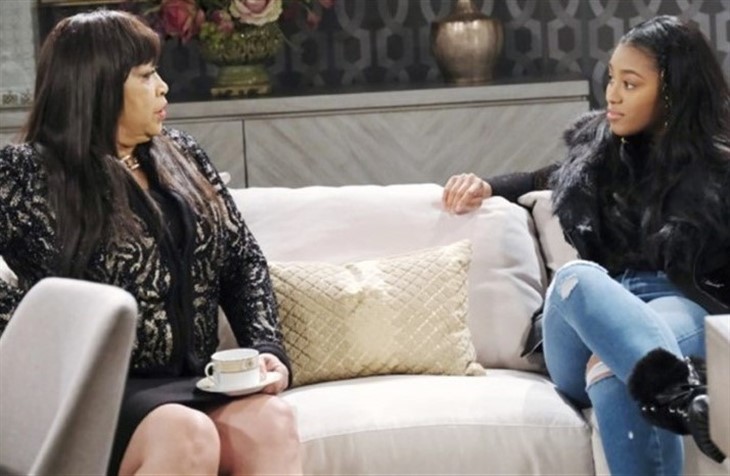 Days of Our Lives (DOOL) spoilers tease that a fast-moving Chanel Dupree (Precious Way) will want Theo Carver (Cameron Johnson) to move in together in an upcoming episode of Days of Our Lives!

Days of Our Lives viewers will remember that Theo and Chanel bumped into each other after Chanel had an unpleasant conversation with her mother, Paulina Price (Jackeé Harry) in Paulina’s Salem Inn Suite. Right on the heels of Chanel trying to stick Claire Brady (Isabel Durant) and Tripp Dalton (Lucas Adams) with a $600 tab for expensive champagne that Paulina, who came over with Eli Grant (Lamon Archey) bailed them out of, she went to her mother’s suite where she was staying and ordered room service that probably cost at least that much if not more!

Paulina was pretty upset and told her baby bird it was time to leave the nest and learn to fly on her own, and Chanel didn’t like the idea of being forced to get a job! At approximately the same time, over at Salem University Hospital, Theo had been visiting with Ciara Brady Weston (Victoria Konefal) and she wanted some real cookie dough ice cream instead of the fake goop as she called it, so Theo obliged her by going out to get her some. Chanel ran into Theo with the ice cream he bought for Ciara in Horton Town Square, and it turned out that they apparently had dated while they were both in Capetown, South Africa. But by the polite yet cool way Theo responded to her demand to take her out for dinner, it sounded like they did not have the best of relationships prior to breaking up!

Theo hasn’t even said that he would be staying in Salem, and they didn’t know that they both had family in Salem either. Chanel is Lani Price Grant’s (Sal Stowers) cousin on her mother’s side, and Theo is Lani’s half-sister, making Chanel his step-cousin! Not related by blood, but related by marriage. Paulina is Tamara Price’s (Marilyn McCoo) sister. It does seem rather strange that the two didn’t know they were in the same family be marriage, and that they both had family in Salem, but that’s how it shakes out! Paulina has staked her claim on Salem, swiping Gabi Hernandez’s (Camila Banus) Gabi Chic storefront out from under her, and complaining to Abe Carver (James Reynolds) that Horton Town Square is too white!

Days of Our Lives (DOOL) Spoilers: Ava Trusts Nicole With A Secret, What Will She Do With It? #Days #DOOL #DaysOfOurLiveshttps://t.co/byH5FtpRWK

So, Chanel will be staking her claim there too and she appears to be just as pushy as her mother is, obviously staking another kind of a claim on Theo! Theo doesn’t even have a job there but Chanel knows he is the Mayor’s son, so he must be loaded with money! Even if he were he would not be able to support the lifestyle Chanel would demand he would, and maybe that is why he broke up with her in Capetown; she probably drained him dry financially or would have if he hadn’t stopped it by breaking up with her! Theo will be in a hurry to get back to South Africa, may be out of reach of the gold-digging Chanel when she thinks he’ll finance her penthouse!