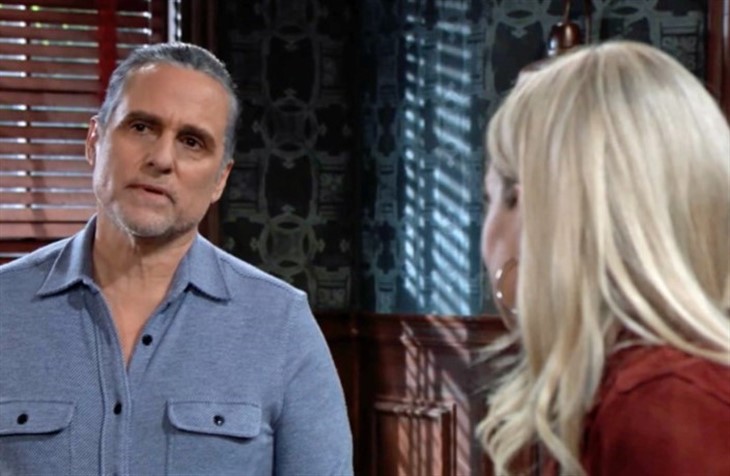 General Hospital (GH) spoilers indicate that Nina Reeves (Cynthia Watros) will continue to grow closer to an amnesiac Sonny Corinthos (Maurice Bernard) who is going by the name “Mike”. Sonny is obviously attracted to Nina. But he doesn’t remember her or any of his former life as a mob boss. Nina had intended to do the right thing for Sonny. She called Sonny’s wife, Carly Corinthos (Laura Wright) to let her know where Sonny was. But Carly was nasty to Nina once again, so Nina remained silent.

Nina has also asked “Mike” if he was happy with his current life, working at the Tan-O for their common friend, Phyllis Caulfield (Joyce Guy), and her husband, Lenny Caulfield (Rif Hutton). Mike seems quite content with the life he has made for himself working for the couple.

He was even able to help them afford to reopen the Tan-O after it was vandalized by winning big at poker. Without knowing it, Mike has been using his skills as Sonny Corinthos all along but he doesn’t have all the stress that goes with being a mob boss. Nina may very well look at Mike and think he’s better off. But if Mike starts romancing Nina, how will she respond? Is she even attracted to “Mike” or is it just to get back at Carly?

General Hospital Spoilers: Alexis Sent To Pentonville For 3 Years, Is She Leaving GH?

GH Spoilers – Deep down, Nina Reeves knows That keeping Sonny Corinthos From His Family Is Wrong.

But it would be irresponsible for Nina to reciprocate any romantic feeling that “Mike” might believe that he has for Nina. She knows he has a wife that he loves and children who are mourning their father, regardless of whether or not believes he is better off now.

If he had his memory back, nothing would keep him from returning to his wife and children, and even the mob life. That’s who Sonny is. For Nina to stand between Sonny and his old life by starting a romance with him, is taking advantage of Sonny. And once he gets his memory back, he won’t likely be very happy that Nina has kept him from his family. Hopefully, Nina will think twice before starting any sort of romance with “Mike”.

Will Nina move forward with a romance with amnesiac Sonny? Will she think better of it and return Sonny to his family? Will Sonny even want to return to that life? Memory issues are a staple in Port Charles, so stay tuned to General Hospital airs weekdays on ABC. And don’t forget to check back right here regularly for all your General Hospital news, information, and spoilers!