Days Of Our Lives (DOOL) Spoilers: Jack Tries To Get His Daughters To Make Up And Play Nice 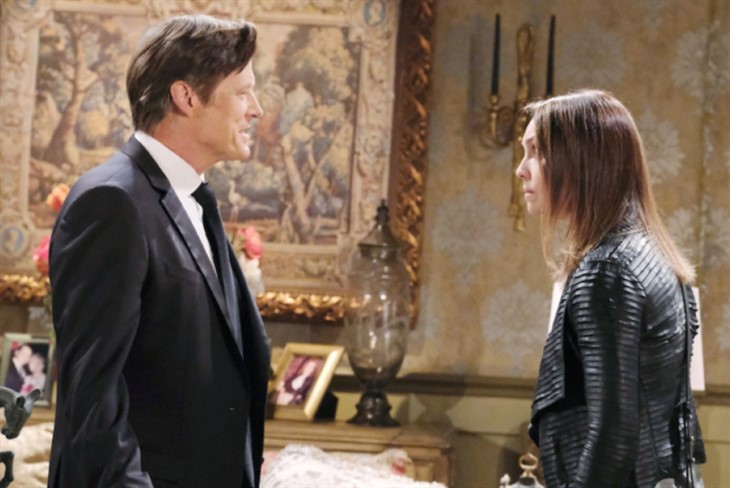 Days of Our Lives (DOOL) spoilers tease that Jack Deveraux (Matthew Ashford) will try to get his two daughters to make up and play nice, but that turns out to be a very big ask in an upcoming episode of Days of Our Lives!

Days of Our Lives viewers will recall that Abigail DiMera (Marci Miller) has a lot of reasons to hate Gwen Rizchech, (Emily O’Brien) and her drugging her over a year ago was just the start! At that time everyone blamed Gabi Hernandez (Camila Banus) for drugging a drink that Abigail consumed at Julie’s Place, but it was later revealed that it was Gwen, who had just gotten into town. Even as she was pursuing Jake DiMera (Brandon Barash) back then known as Jake Lambert, she was honing in on the Deveraux family!

Up to the point when Laura Horton (Jaime Lyn Bauer) came and cleared everything up, and Gwen had revealed that she was Jack’s daughter he never knew about, Abigail had other reasons to hate Gwen. She tried to steal her husband, she ruined her parents’ anniversary party, and she lied to Chad DiMera (Billy Flynn) and put ideas in his head that she, Abigail, was having an affair with Jake!

Gwen had manipulated Abigail to discover her father’s letter to Kate Roberts (Lauren Koslow) breaking off their short affair that happened while her mother, Jennifer Deveraux (at that time Melissa Reeves) was in a yearlong coma! But what really has Abigail torqued off is that she is certain that Gwen murdered her grandmother Laura, but Jack believes her when she denies it and doesn’t believe Abigail!

Jack will try to get Abigail to agree to a truce with Gwen, but it’s a pretty big ask! Of course it takes two to tango, so he had talked to Gwen to make nice as well. It was just about all Jack could take when he found out that Abigail, with Gabi’s help, had taken Gwen hostage and kept her in the wine cellar tied up to a chair! If it hadn’t been for Gabi stopping her, she’d have injected her with the same drug from Dr. Wilhelm Rolf (William Utay) that Gwen had slipped in her drink! Abigail was recovering from its hallucinogenic effects for many, many months down in that clinic in Florida!

Days Of Our Lives Spoilers: Bryan Dattilo Has A Huge DOOL Milestone to Celebrate https://t.co/XiJBgDdIXo pic.twitter.com/0Lcz8L0DUy

And Jack has to try and handle these two largely by himself, with some help from Chad, since Jennifer is out of town working out Laura’s estate with her brother and JJ Deveraux (Casey Moss) had returned back to where he is living! Abigail is a very stubborn young lady, and she cannot let go of the notion that Gwen killed Grandma Laura.

Jack and Chad both have been working with Gwen and Abigail separately trying to get the two to play nice and get along, and Gwen has jealousy over the golden-haired child and Abigail has a hatred for the brunette interloper, but they finally agree to try to get along for the sake of Chad and Abigail’s children, who of course love their mother but also are fond of their former nanny!