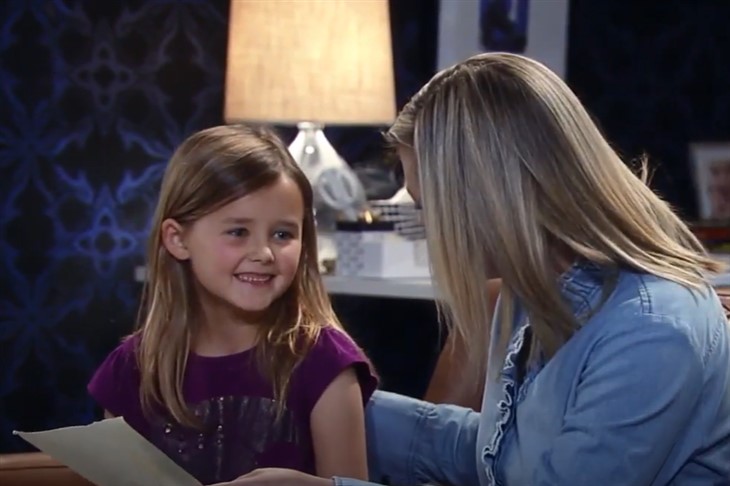 General Hospital (GH) spoilers reveal that young actress Lily Fisher (Georgie Spinelli) has an exciting new project to talk about. The young thespian who has been in the Port Charles, New York-based show for years has landed a primetime role and her future definitely looks bright. She will be seen on the TBS network show, Chad.

Georgie is the daughter of Maxie Jones (Kirsten Storms) and Damian Spinelli (Bradford Anderson). Her role is a recurring one so hopefully, fans will continue to be able to see the adorable star on GH even as she transitions to primetime.

The role was recast in 2017 when Fisher played Georgie at her mom’s wedding.

Georgie was born in 2013 when Maxie Jones was acting as a surrogate for her best friend, Lulu Falconeri (Emme Rylan), who was unable to carry a baby with her husband Dante Falconeri (Dominic Zamprogna).

Maxie kept a secret hidden from the couple, however, that she had miscarried their baby and then got pregnant after a one-night stand with Damian Spinelli. The truth eventually came out and a heated custody battle ensued wherein Dante and Lulu fought Maxie and Spinelli for the little girl.

Eventually, the day was saved when the judge awarded full custody to Spinelli. Lying Maxie was forbidden to see her daughter but later the case was revisited and she was given visitation rights to Georgie, who was now living in Seattle with Spinelli.

In January 2020 Spinelli surprised Maxie by dropping in on her with Georgie, saying that they were back in Port Charles because his SO had a job interview nearby and that they may be moving back there.

Now that Maxie has given up on Peter August (Wes Ramsey) fans are hoping that she and Spin and Georgie can become a happy blended family. Will that happen?

It seems that Maxie still harbors feelings for the cad, even though she knows the full extent of what he has done. Yet she is hatching a plan to keep him out of their unborn baby’s life and she may turn to her ex and master subterfuger Spinelli to help her achieve her goal. If she does, fans may see sparks between Maxie and Spin again. Stay tuned fans, it’s about to get interesting!